The first day of this week marked the 75th anniversary of the start of World War II, a war that would shape the world. The SigEp Patriots Project (SPP) works tirelessly to learn about all of our military brothers, but takes particular interest in the WWII patriots as the VA says they are dying at the rate of 1000 a day. Obituaries are one way to learn about a person. However, I can’t possibly articulate the loss we experience if we fail to learn something about these men and their service from them while they are still alive. A shout out to the men of the California Pi chapter who get it, and are working with the Library of Congress’ Veteran’s History Project to interview veterans living near Stanford University.

05 SEP 1942
A graduate of the University of Delaware (Class of ’34), Delaware Alpha Brother S. Clifford Dunn entered the Army on this date.

05 SEP 1944
Ohio Epsilon Brother Haldean S. Lindsey, member of the Class of ’34 at Ohio Wesleyan, entered the service of the U.S. Navy Chaplain Corps on this date.

07 SEP 1956
A SigEp Patriot made aviation history on this date.


Korean War Veteran and Fighter Ace, Indiana Alpha Brother Captain Iven C. "Kinch" Kincheloe, Jr., U.S. Air Force piloted the Bell X-2 research rocket plane to a speed greater than 2,000mph and to a world's record altitude of 126,200 feet – the first flight ever above 100,000 feet. For this he was nicknamed "America's No. 1 Spaceman" and received the Mackay Trophy the next year. In 1987, Brother Kincheloe was posthumously awarded the SigEp Citation.

01 SEP 1962
World War II Veteran and Virginia Zeta Brother General Robert J. Wood, U.S. Army (Retired) was promoted to the rank of General (four-stars) on this date – making him the fourth SigEp Patriot to reach the four-star rank in a branch of the U.S. military.

07 SEP 1964
Not long after graduating with the class of ’64 at Michigan State, Brother Carl J. Schwind of the Michigan Epsilon chapter entered the U.S. Army.

01 SEP 1965
After 35 years of military service and three years to the day after his promotion to General, Brother Robert Wood retired from the Army... for the first time. He would subsequently be re-activated in 1968, and serve two more years before his second (and last) retirement.

The Blockton, IA native left school in May 1917 to attend the officers’ training camp at Fort Snelling, MN, and was subsequently commissioned a second lieutenant and assigned to France as a battalion orientation officer. After his military service, he returned to the U.S. in early 1919, and in June received his bachelor’s degree from Iowa State.

Bourke subsequently obtained his law degree from the University of Iowa, College of Law, and was a practicing attorney in Cedar Rapids until being elected to the Iowa House of Representatives in 1934. This began his commitment to public service.

In fact, due to the scope and extent of his diligent service to America it cannot be stated in this work. Several of the references used in the following work have been confirmed independently, and we include this link with great confidence that it accurately reflects Brother Hickenlooper and his many accomplishments – http://en.wikipedia.org/wiki/Bourke_B._Hickenlooper

Respect can be paid to Brother Hickenlooper at a mausoleum at Cedar Memorial Cemetery, Cedar Rapids, IA.

01 SEP 1979
World War II Veteran Vermont Alpha Brother David V. Anderson died on this date. David was a member of the Class of ’22. Upon his death, he was cremated, and the location of his remains are unknown.

We continue to research about Brother Anderson, and we hope you will contact us if you have any information about him.

06 SEP 2000
On this date, World War II Veteran Sergeant Robert H. Hendricks, USAAC died on this date. Robert joined the USAAC in APR 1941 in Columbus, OH, and served until his discharge in NOV 1945.

Robert was a 1935 graduate of Fenn College, and brother of Lambda Tau Delta (LTD) there. He became our brother when that LTD chapter became OH Nu.

06 SEP 2003
On this date, Veteran of World War II, Korea & Vietnam and Pennsylvania Mu Brother Brigadier General William R. Sarber, Jr., U.S. Army (Retired) died in a Yorktown, Virginia nursing home. While his military service started in 1946 as a Private, he became a SigEp Patriot in 1951 – when he attended college following the war and became our Brother. He served in the nation in uniform for 31 years.

Respect can be paid to Brother Sarber at Section 66, Site 4292-A in Arlington National Cemetery, Arlington, VA.

02 SEP 2004
U.S. Navy World War II Veteran and Colorado Alpha Brother Donn B. Brown died on this date. The Dayton, OH native attended the University of Colorado, where he became a member of SigEp, and earned his mechanical engineering degree.

The war brought Donn to California. He served in the U.S. Navy in underwater demolition, which was a precursor to the Navy SEALs. After his military service, Brother Brown began his career with A.J. Bayer, Co. in Los Angeles, eventually becoming President and Chairman of the company. One of Donn's greatest joys was helping others. He served on the board of directors of many organizations, including the Boy Scouts of America, the Salvation Army, Florence Crittenton Center, Hollywood Presbyterian Hospital, First Lincoln Financial Corp. and Union Bank, as well as being a longtime member of the Rotary Club. 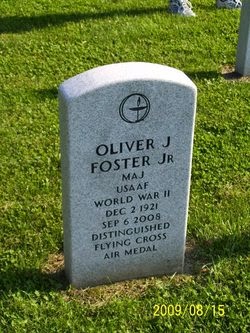 The Class of ‘48 graduate studied architecture at Cornell University, and practiced in Sweden before returning to the U.S. to pursue his career in West Hartford, CT, where he was a partner in a firm. The balance of his career was spent in private practice in Maine and Prince Edward Island, Canada. He was a member of the American Institute of Architects.

His medals include the Distinguished Flying Cross and four Air Medals.

Respect can be paid to Brother Foster at Section E-50, Site A in Vermont Veterans Memorial Cemetery, Montpelier, VT.

On the same date, World War II Veteran and Illinois Alpha Brother Radioman Third Class Walter W. Rust, U.S Navy Reserve died at his home in Bellevue, Washington at the age of 84. Walt served in the U.S. Navy as a radioman aboard the escort aircraft carrier USS Puget Sound (CVE-113) in the South Pacific (1944-46). After the war, Walter attended the University of Illinois, and graduated in 1950. 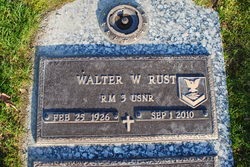 Walter grew up in Elgin, IL, and there he set state and national juvenile and junior ice skate racing records en route to several state, national and North American race titles. In 1944, Walter graduated from Elgin High School, and was inducted into the Elgin Sports Hall of Fame in 1996.

After graduation, Brother Rust moved his family to Bellevue. In 1961, he working for Weyerhaeuser and retired from the company in 1980. Spotting an opportunity, he started his own business, Pasayten Incorporated, later that year, and retired to retired life in 2008.

A community servant, Walter was a Little League umpire, and active in the Boy Scouts for more than 20 years. He served as Scout Master and Assistant Scout Master with Troop 600 of Bellevue and was awarded the Silver Beaver.

Respect can be paid to Brother Rust at Sunset Hills Memorial Park in Bellevue.

The Ogden, UT native entered active duty with the USAAC in OCT 1941 as a B-17 pilot. Immediately after the attack on Pearl Harbor, he deployed to the Pacific Theater, where he flew numerous combat missions against enemy shipping and ground targets. At 24, he was the youngest Lieutenant Colonel in the AAC, commanding a squadron of B-29s. In the last mission of the war, he led a composite crew drawn from all the air crews in the Pacific Theater to fly the official photos of the Japanese surrender back to Washington, DC. He died on the 65th anniversary of that mission.

William served in Vietnam, completing more than 1,000 combat missions. He was rated in 62 different aircraft from bi-planes to jets, with more than 22,000 flying hours.

Along with his affiliation in Sigma Phi Epsilon, Brother Gibson’s obituary also stated that he was a member of the Quiet Birdmen and the Order of Daedalians. He served the Air Force Association as a National Director and a trustee of the Aerospace Education Foundation. William was also devoted to his fellow veterans of the 505th Bomb Group, who met regularly for reunions under his direction.

Our thoughts and prayers go out to the family, friends and chapter brothers of SigEp Patriots Swearngin, Warner and Van Horne. While they are no longer with us, the greatest casualty is being forgotten, and SPP pledges that these Brothers will always be remembered.

SIGEP PATRIOT NEWS
**A big WELCOME HOME to Operation Iraqi Freedom/New Dawn Veteran and New York Chi Brother First Lieutenant Brian Bierwirth, U.S. Army as he returned Sunday from another nine month deployment.
**It was quite a week for nuptials and congratulations go out to the following brothers: On 01 SEP, Operation Enduring Freedom Veteran and Illinois Mu Brother First Lieutenant Matthew Bruce, U.S. Army National Guard (Illinois) got married, and Operation Enduring Freedom Veteran and Illinois Eta Brother Specialist Pete “Dangerzone” Carpenter, U.S. Army got married on 03 SEP. After the publication of Volume 25, we read the announcement late last week of the marriage of Operation Enduring Freedom Veteran and Florida Iota Brother First Lieutenant William “Chase” Busch, U.S. Army. Recently engaged brothers include Washington Beta Brother First Lieutenant Alex Shuler, U.S. Air Force, and New York Rho Brother Second Lieutenant Rich Dolan, U.S. Army.
**Florida Zeta Brother Don MacCuish III recently learned that he has been selected for promotion to Colonel, U.S. Army. Congratulations Don! Now when is the wetting down?
**The SPP Flag Legacy Project continues the passing of a SigEp and U.S. flag among brothers deployed around the world, and this week the flags departed Kandahar Air Field for the next brother who is also in Afghanistan. Send an email to sigepswhoserve@gmail.com if you are interested in receiving the flags.