SigEps truly are everywhere, and SigEp Patriots are no exception. On Thursday, I had the sincere honor to meet up with three amazing SigEp Patriots near Fort Bragg with incredible tales of travel and accomplishments that could easily fill hours of conversation.
Today, I had an opportunity to visit Seymour Johnson Air Force Base in Goldsboro, NC. The base is the last remaining U.S. military installation to be named in honor of a SigEp Patriot. Named in honor of NC Delta Brother Lieutenant Seymour Johnson, U.S. Navy, it is the only USAF base in the world named after a member of the U.S. Navy. Can you name the other base that named after a SigEp Patriot? 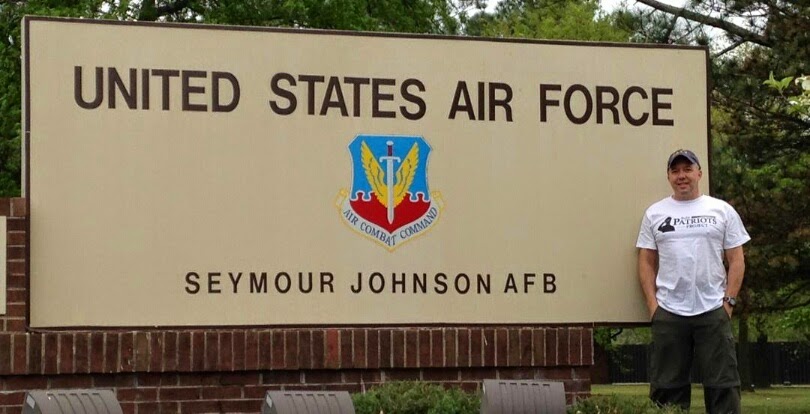 14 APR 1953
On this date, U.S. Marine Corps World War I Veteran, Governor (Virginia) and VA Zeta Brother William M. Tuck began his service to the citizens of Virginia and the Nation as a member of the Eighty-Third Congress. Brother Tuck was reelected to seven succeeding Congresses.

17 APR 2002
NY Alpha Brother Major Oscar B. Millard, U.S. Army (Retired), 83, died on this date. After retiring from the Army, Brother Millard had a career in Civil Service Finance before completely retiring.

Respect can be paid to Brother Millard at Arlington Park Cemetery, Jacksonville, FL.

16 APR 2005
On this date, TN Eta Brother Joshua Lawrence raised his hand and swore to defend the United States against its enemies.

19 APR 2005
Just three days after Josh Lawrence joined the Army, Operation IRAQI FREEDOM Veteran and NY Eta Brother Specialist Jacob Marvin “Puck” Pfister, U.S. Army was killed in action in Baghdad, Iraq when a vehicle-borne improvised explosive device detonated near his dismounted patrol. Jacob, affectionately known to us at NY Eta as “Puck”, was assigned to the 3rd Battalion, 7th Infantry Regiment, 3rd Infantry Division out of Fort Stewart, GA. He was posthumously awarded the Bronze Star and Purple Heart, and promoted to Corporal. He was 27 years old, and his wife was pregnant with their first child, Maddison.

Growing up in Buffalo, NY, Puck attended Grover Cleveland High School, where he received a citizenship award upon graduation. After attending Buffalo State College, he joined the Army and moved to Florida.

Puck’s mom described her son as a serious man who loved his family. “The way he put it to me is, ‘Mom, who would you rather have over there defending you, me or some other joker?’” That was classic Puck.

Respect can be paid to Brother Pfister at his gravesite at Saint Vincent de Paul Cemetery, Derby, New York, as well as at a memorial cenotaph located on Fort Stewart.

His legacy lives on with the creation of the Donald Lee Huston Memorial Scholarship by his family at the University of Maryland to provide an annual scholarship for students enrolled in the A. James Clark School of Engineering.

Respect can be paid to Brother Huston at Section WIV, Row A, Site 19 of Delaware Veterans Memorial Cemetery, Bear, DE.

16 APR 2010
World War II Veteran and NC Delta Renaissance Brother Lieutenant Reginald F. “Mutt” McCoy, U.S. Army Air Corps died on this date in Laurinburg, North Carolina. During WWII, he was stationed in North Africa, Italy and Corsica, and was awaiting transfer to the Pacific Theater when the war ended.

“The Legend of Laurinburg” attended local schools, and studied at the University of North Carolina Chapel Hill. Before completing his college degree, he returned to Laurinburg to help support his mother and siblings and began a 60-year career in the Mercantile and Agribusiness sector that was interrupted by his service to the Nation. Mutt became President of John F. McNair, Inc. and later President and Chairman of McNair Investment Company.

He was awarded the Silver Beaver Award by Boy Scouts of America in 1957 and supported their work throughout his life. His son's chapter made him an honorary member.

16 APR 2012
Two SigEp Patriots who served our country in the U.S. Army died on this date.

U.S. Army Veteran OK Beta Brother Kenneth H. “Buddy” Bell died in Oklahoma City, Oklahoma on this date. A 1955 graduate of OU, Brother Bell served with the 101st Airborne, and upon his discharge he spent 20 years in California before returning to Oklahoma. He owned the Golf Outlet in Oklahoma City.

Respect can be paid to Brother Bell at Rose Hill Burial Park in Oklahoma City.

Respect can be paid to Brother Manocchio at Saint Mary’s Cemetery, Boonton, NJ.

20 APR 2012
Four days later, the opportunity to learn from two other SigEp Patriots was lost to us forever.

World War II Veteran and VA Alpha Brother Lieutenant Grover C. Pitts, Jr., U.S. Navy, 94, died at his home in Charlottesville, Virginia. Brother Pitts spent two postdoctoral years at the now-defunct Harvard Fatigue Laboratory and then enlisted in the Navy in 1945. He served for four years as a physiologist at the Naval Medical Research Institute in Bethesda, Maryland, where he did research on the physiological effects of breathing under the altered conditions experienced by naval personnel in submarines, aircraft carriers, and other naval craft.

In 1950, Brother Pitts accepted a position at the University of Virginia (UVA), and he taught Physiology to first year students in the Medical School for 35 years until his retirement. He published approximately 90 research papers and articles and presented the results at scientific meetings in Europe, Asia and North America. Among various other areas of research pursued while at the UVA, Grover collaborated with Soviet scientists in a study of the physiological effects of weightlessness. For this work, carried out on the Soviet space mission Kosmos 1149 in 1979, he was awarded the Certificate of Merit from the Institute of Biomedical Problems of Moscow and the Cosmos Achievement Award of the National Aeronautics and Space Administration.

Respect can be paid to Brother Van Arsdalen at Bethel Methodist Mausoleum in Lewes, DE.

RECENT LOSSES TO THE ROLL
* U.S. Army World War II Veteran PA Epsilon Brother Eric M. Chemnitius passed away peacefully 02 MAR. Upon graduation from high school he served in the Headquarters Company, 59th Armored Infantry Battalion during WWII. At the conclusion of the war, he was honorably discharged, attended Lehigh University on the GI Bill, and brought his leadership to PA Epsilon. A memorial service to celebrate his life will be held at the Glen Ridge Congregational Church (195 Ridgewood Ave, Glen Ridge, NJ) on 26 April at 2:30pm. Donations in his memory may be made to the Glen Ridge Volunteer Ambulance Squad, 3 Herman Street, Glen Ridge, NJ 07046.
* Korean War Veteran and KS Beta Brother First Lieutenant Norman M. Held, U.S. Air Force, 87 passed away on 22 MAR at the Muse Norris Hospice Inpatient Unit in Mason City, Iowa. At his recent funeral, military honors were rendered by the Clear Lake VFW. Norman was a member of the Ventura City Council for 36 years and Mayor for 10 years. Brother Held was a dedicated advisor to IA Beta at Iowa State University from 1980-96.
* U.S. Air Force Korean War Veteran OK Beta Brother Russell E. Swarts, Jr. passed away at the age of 84 in Oklahoma City, Oklahoma after struggling with cancer. Following graduation, Russell served in the Judge Advocate General Officer during the Korean War. In lieu of flowers, the family requests donations be made to Oklahoma Medical Research Foundation for Cancer Research.

Our thoughts and prayers go out to the families, friends and chapter brothers of SigEp Patriots Chemnitius, Held & Swarts. The SigEp Patriots Project (SPP) pledges that their lives and service to the Nation will always be remembered.

SPP UPDATE
* The SPP email list is still active with more than 100 military SigEps utilizing that method to connect with other SigEp Patriots. If you would like to be added just send me an email.
* SigEps Who Serve (SWS) – the official Facebook group of SPP – is comprised of nearly 700 SigEp Patriots, and we await confirmation from an additional 20 Brothers! If you are a brother who serves/served or know of one, go to http://www.facebook.com/groups/sigepswhoserve. You will be asked to provide your home chapter, rank, branch of service, military affiliation and whether you are a combat veteran.
* Our Twitter account – @SigEpsWhoServe – has 40 followers.