“Our debt to the heroic men and valiant women in the service of our country can never be repaid. They have earned our undying gratitude. America will never forget their sacrifices.”
~ President Harry S. Truman during a joint session of Congress on 16 April 1945

Greetings from the temporary SigEp Patriots Project (SPP) home office at Fort Bragg, NC. My apologies. The goal for 2014 was to write one edition of this work each week, however, the U.S. military had some plans for me that have been keeping me very busy.

This week, we remember and honor 12 brothers, including two who made the ultimate sacrifice, and one brother who was awarded the Army Distinguished Service Cross (DSC).

10 APR 1926
World War I Veteran and OH Gamma Brother Captain Robert L. Tavenner, U.S. Army died on this date in Columbus, Ohio while serving as an instructor in the Department of Military Science and Tactics at The Ohio State University (OSU). Brother Tavenner was commissioned a Second Lieutenant in the Ohio Army National Guard in 1917, and subsequently assigned to the 37th Division of the American Expeditionary Force.

Soon after arriving in the European Theater, he selflessly led his men while performing heroic acts for which he was awarded the Distinguished Service Cross (DSC) – the highest award presented by the U.S. Army second only to the Medal of Honor.

The SPP archives show that Brother Tavenner is one of five SigEp Patriots to be awarded one or more DSCs.

Robert attended the College of Arts at OSU where he was also in the Corps of Cadets. He graduated in 1908.

13 APR 1945
On this date, during Operation VICTOR II, World War II Veteran and OK Alpha Brother First Lieutenant Frank M. Pinney, U. S. Army was serving with the 182nd Infantry Battalion of the Americal Division when he made the ultimate sacrifice near Cebu City, Cebu, Philippines.

In MAY 1941, Brother Pinney received a reserve commission in the U.S. Army upon his graduation with a degree in Aeronautics Administration, and was shipped overseas in SEP 1943. He was assigned to the 182nd as the Battalion Supply Officer.

On 13 APR 1945, during a battle on Hill 260, First Lieutenant Pinney volunteered to lead a "carrying party" up Hill 260 in order to refit a rifle company engaged with the enemy and in desperate need of re-supply. While slugging his way up a trail, his party was ambushed and he was and killed instantly by a Japanese machine gun.

For his actions on this date he was posthumously awarded his second Bronze Star.

Frank became a SigEp during his three years at Oklahoma A & M (now Oklahoma State University), where he was also a member of the Pershing Rifles, Scabbard and Blade, and the Aggie Society.

Frank is memorialized alongside other patriotic citizens of Oklahoma on the website for The Oklahoma Veteran’s Memorial Gardens, Oklahoma’s War Dead, World War II Years 1941 to 1945.(http://www.oklahomaveteransmemorial.us/lost_war2.html)

“The President of the United States of America, authorized by Act of Congress, July 2, 1926, takes pride in presenting the Distinguished Flying Cross (Posthumously) to Captain (Armor) James Mitchell Atchison, United States Army, for heroism while participating in aerial flight evidenced by voluntary action above and beyond the call of duty on 12 April 1970, while serving as a Pilot with the Air Cavalry Troop, 11th Armored Cavalry Regiment, in the Republic of Vietnam. On this date, Captain Atchison was flying a reconnaissance mission over known enemy locations. While making several low-level passes, the craft came under intense ground fire from the dense jungle. Although he was wounded, he realized that the helicopter's controls were seriously damaged and attempted to aid the pilot to maneuver the craft. Captain Atchison quickly briefed the crew on how to prepare for the crash. As a result of his actions, four men were saved and soon evacuated. Captain Atchison's actions were in keeping with the highest traditions of the military service and reflect great credit upon himself, his unit and the United States Army.”

Brother Atchison earned his B.A. in History at the University of West Virginia where he was a member of the marching band, Sigma Alpha Theta History Honorary Fraternity, ROTC and the Scabbard & Blade Society. He received his commission as a Second Lieutenant in the U.S. Army upon graduation in 1967. 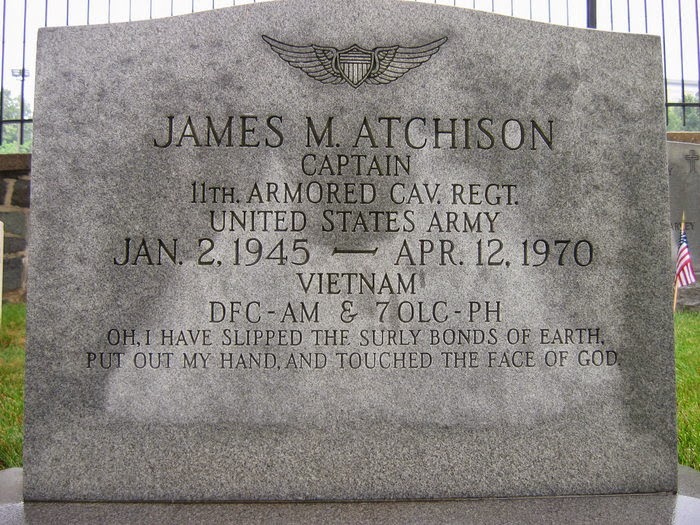 James is one in a long line of SigEp Patriot aviators. In April 1969, he graduated from the Army Primary Helicopter School at Fort Wolters, TX. He was then stationed at Hunter Army Air Field, Savannah, GA, where he received advanced flight training, and earned his Wings in AUG 1969. James’ tour of duty in Vietnam started in OCT 1969, and he was promoted to the rank of Captain in DEC 1969.  In addition to the Distinguished Flying Cross, Brother Atchison’s awards include the Air Medal (with seven oak leaf clusters), Purple Heart, and National Defense Service Medal.

Respect can be paid to Brother Atchison at Section 8, Site 6371 at Arlington National Cemetery, Arlington, VA.

07 APR 1984
Vietnam Veteran and NE Beta Brother Lieutenant Commander Kenneth G. Doeschot, U.S. Navy (Retired) died on this date in Newark, California at the age of 49 after a long illness. Upon his death, Kenneth was buried at sea. During his career he served two tours in Vietnam.

At NE Beta, Brother Doeschot was the 117th initiate with a grand chapter number of 44,525.

10 APR 2010
U.S. Army Air Corps World War II Veteran and TN Alpha Brother James M. Delzell died on this date. James served in the Pacific Theater during WWII. After the war, he received his bachelor's degree from the University of Tennessee. He retired from National Life and Accident Insurance Company, and served on the Board of Ravenwood Country Club.

Respect can be paid to Brother Delzell at Woodlawn Cemetery in Nashville, TN.

Our thoughts and prayers go out to the families, friends and chapter brothers of SigEp Patriots Empey, Bartlett, Porter, Lindegren & Stephens. The SigEp Patriots Project (SPP) pledges that their lives and service to the Nation will always be remembered.

CELEBRATIONS!
* AK Alpha Brother Specialist John Anderson, U.S. Army is now engaged! Ms. Michaella Rice found a ring at the end of her fishing line placed there by John while ice fishing and she said, “Yes!” Congratulations to John and Michaella.


sigepswhoserve@gmail.com
Posted by Ed Jones at 5:07 PM
Email ThisBlogThis!Share to TwitterShare to FacebookShare to Pinterest