And yet another chapter has its wings clipped, so to speak. At least this time they can remain on campus while they work to get back in good graces with the university and HQ.
The list of offences is below, and ranges from underage alcohol to hazing to prescription drug abuse, and more. But the burning question from this article is "WTF kind of 'props' were they using to take lewd photos?" Inquiring minds want to know.

Purdue places a fraternity on probation for multiple violations.

Officials at Purdue University announced Wednesday that the Sigma Phi Epsilon fraternity has been placed on probation through May 15, 2017. 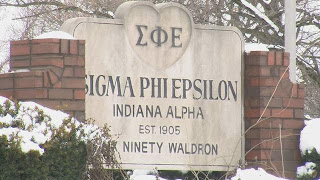 The probation stems from violations that include making alcohol available to minors, stealing sheet signs from other Purdue student organizations, hazing in the form of demeaning or intimidating behavior toward new members, and taking lewd photographs with props.

The Office of the Dean of Students under went an investigation and concluded that three members were using the chapter's text messaging system to make prescription drugs available. All of the incidents were reported during the fall 2013 semester.

"The length of this probation will give Sigma Phi Epsilon a chance to correct several organizational culture issues that need to be addressed in order for the group to remain part of the Purdue University community," Associate Dean of Students Jeffery Stefancic said.

"The assigned sanctions send a strong message that we have high expectations for Purdue's fraternity and sorority community and that certain behaviors will not be tolerated," Stefancic continued.

During the probationary period, Sigma Phi Epsilon cannot have alcohol at its chapter house or on any chapter property. It cannot sponsor or co-sponsor any function at which alcohol is served, and it cannot participate in any Purdue Grand Prix activities next spring or Homecoming activities next fall.

In addition, the chapter is required to have an alumni adviser present at all new member events through Aug. 15, 2015.

"Sigma Phi Epsilon Fraternity values its partnership with Purdue University and the collaborative effort to addresss concerns about the actions of certain members," said Kyle Sutton, director of the fraternity's Balanced Man program. "We look forward to supporting a fraternity experience for members committed to the highest standards of Purdue University and SigEp."

'via Blog this'
Posted by wordjunky at 2:40 PM
Email ThisBlogThis!Share to TwitterShare to FacebookShare to Pinterest