This young man was only in the TN Alpha chapter for a short time, but he was still a brother. When he passed away recently the current chapter members honored him with a notice on "The Rock" - an impromptu billboard used for years by students with something to say. 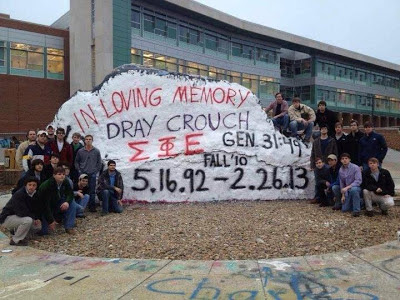 
UTK Student Graduated From McCallie In 2010

Dray Crouch
Joseph Dray Crouch, 20 of Ooltewah, died on Tuesday, February 26, 2013 at his home.
He was born in Memphis, Tn., and graduated from McCallie in 2010. Dray was a Life Guard at First Cumberland Presbyterian Church for four years. He attended University of Tennessee at Knoxville and was a brother of the Sigma Phi Epsilon fraternity.
Dray was preceded in death by his paternal grandparents, Joseph Eli Crouch and Dottie Metcalf.
Survivors include his parents, Sandy and Jill Crouch, Ooltewah; sister, Carrie Crouch, Ooltewah, maternal grandparents, Nelson and Sandra Fagan, Blairsville, Ga., and several other extended family members.
Funeral services will be held at 3 p.m. on Saturday, March 2, in the funeral home chapel with Chaplain Joshua Deitrick and Parker Nicholson officiating.
Visit www.heritagefh.com to share words of comfort and to view the memorial tribute.
The family will receive friends from 12-3 p.m. on Saturday, March 2, at Heritage Funeral Home, East Brainerd Road.
Posted by wordjunky at 8:03 AM
Email ThisBlogThis!Share to TwitterShare to FacebookShare to Pinterest