<Sigh> Why does this not surprise me? At least no one was hazed, kidnapped, or assaulted, or forced to drink to excess. However, we have no word on whether the model ended up with frostbitten manly bits.


WEST LAFAYETTE, Ind. (WLFI) - Many people used this week’s snow to make snow-people and igloos, but not everyone. Police officers received a report of a giant snow phallus sitting on the lawn of a campus fraternity.

According to West Lafayette police dispatchers, on Thursday afternoon someone called to report a giant male member made of snow in front of Sigma Phi Epsilon fraternity at 690 Waldron St.

Police officers responded to the fraternity house to put an end to the snow sculpture.

Some of the fraternity’s brothers WISH-TV's sister station WLFI-TV spoke with said it took them roughly 2.5 hours to build it, and that the officers who arrived told them they could either turn the sculpture into a snowman or it would have to be torn down.

The brothers were unable to reach that goal, and the sculpture was destroyed.

According to previous discussions WLFI-TV has had with police on this type of snow sculpture, this violates the state statute category of obscene matter.

Indiana Code 35-49-3-1 prohibits the sale, distribution or exhibition of obscene matter, which snow shaped into male genitals would qualify as.

If charges were filed in this case, it would mean a Class A misdemeanor for the perpetrators. However because the sculpture was destroyed, no charges were pursued.

This isn’t the first time a large, icy male member has been spotted after a big snow in the area.


Oh, wait. You want a picture of the offending sculpture? Filthy minded pervs! OK, Here you go (after the jump to allay the NSFW crew): 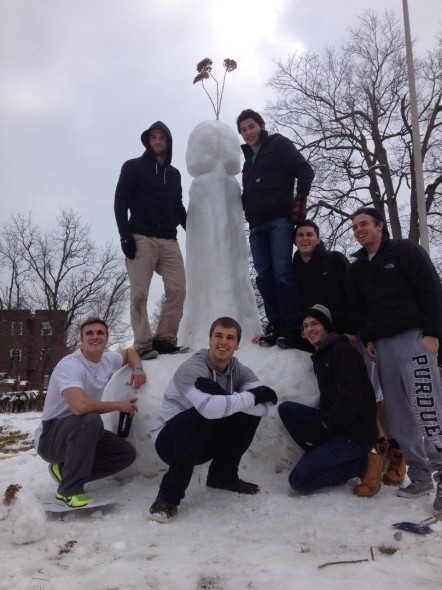 Posted by wordjunky at 9:07 AM
Email ThisBlogThis!Share to TwitterShare to FacebookShare to Pinterest