At my first Conclave in 1997, I became truly hooked on SigEp.  My chapter had won a Buchanan Cup.  It was the third in a row for us, but the first time that I had contributed to their success.  I was excited to be a part of that legacy.  There was about ten undergraduates and alumni there from my chapter to celebrate that experience. 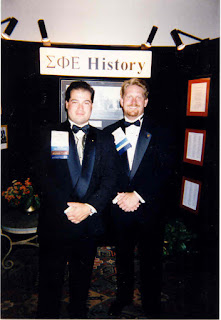 Those alumni in attendance were the long time volunteers I had mentioned above.  My chapter isn't unique.  It's the volunteers like many of you reading this that bring consistency to our chapters and help them grow.  At that 1997 Conclave those volunteers met with other long time SigEp volunteers and came together to form a Society that would celebrate our dedication as volunteers to SigEp and share the fun and fellowship that they had together at Conclave.  Loosely, this was the foundation of the Anthony "NUTS!" McAuliffe Society.

These volunteers felt so strongly about the Conclave experience that they began to raise money and sponsor Conclave registrations for deserving undergraduates.  At my first Conclave as an alumnus in 2001, I joined this group.  In 2011, I was elected as the "Brigadier General", leading this group over the two years between Conclaves.

This happens to be a Conclave year, and I'm happy to announce that we are offering our scholarship once again.  We have guaranteed that 4 undergraduates will get registration scholarships, but we may be able to offer more as our group grows leading up to Conclave.  The application is linked below.

Also if you're a dedicated volunteer interested in finding out more or even joining the NUTS! Society, please ask.  There will be NUTS! at all the Carlson Leadership Academies and they will make themselves known at the alumni receptions.

See you at Conclave!