CLA from a Volunteer's Point of View


The weekend of February 1-3 I was on the CLA faculty for the Dallas (really Grapevine) TX CLA at the Gaylord Texan, site of the SigEp Conclave this summer (July 31 - Aug 4). The weekend was a grand success and was capped off by a surprise that caught me completely off guard.

On arriving Friday after noon we went through the usual routine of check-in, find the room, then head out to see who else has shown up. As a volunteer who has been to a number of CLAs, Conclaves, etc., connecting with others whom I only see at these events is always a treat. Some of my most cherished friendships have grown from these periodic gatherings. Many of the usual faces were in residence along with a few new ones and some disappointments who did not show up this year.

The venue was spectacular and should make for a very successful Conclave later this year. Over the course of the weekend we got a chance to get a dry run of the facilities, staff responsiveness, and of course, the food. All were first rate, though I personally think the Saturday dinner choice could have been better (tough flank steak rolled in underdone bacon is my best guess). Lets hope the menu improves by August. There were plenty of configurable meeting rooms, and even when I threw a curve by showing up with a projector for my session the hotel staff didn't break a sweat and got it set up right away.

Friday night I was tasked with facilitating a reading of the proposed "Brother Mentor" Ritual that is expected to be voted on at Conclave. As this is a public post I will simply say it is obvious the Ritual Task Force has put a lot of thought into making it meaningful.

Facilitating the VP Communications session took the bulk of Saturday. This was my first time as an all day session presenter, but the able and experienced Kay Robinson from OK Alpha (OSU) helped me out - or maybe I helped her - as we shared the duty. For those who would like to see what the VP Comm session entails, here is a set of presentation slides I made from the facilitator's guide.

The Saturday dinner was capped off by a speech from former Grand Pres. Garry Kief which was of course full not only with his heartfelt love of the fraternity but also with jokes that only Rodney Dangerfield could respect. The awards were next, and they were fairly much as you would expect, Zollinger Seniors, Quest to Greece recipients, and Volunteers of the year. All went to most deserving people.

Then there was one last item, a rather small pewter "Jefferson cup". This is the "Distinguished Alumnus" award, and is not given out every time. I was listening to see who would be the grand person honored this year when it began to dawn on me that what they were saying sounded a lot like my experience. As Garry said, "Watching the changing look on your face as you realized they were talking about you...was a great Sig Ep moment." I was totally surprised and humbled and almost asked for a recount. Here is what it looks like: 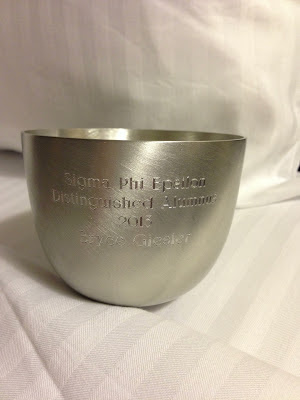 It is all a bit of a blur after that. One thing is for certain. I'll be back. It was a great weekend even before the award. That was just icing on the cake.

Posted by wordjunky at 5:43 PM
Email ThisBlogThis!Share to TwitterShare to FacebookShare to Pinterest