This day in SigEp Patriots history is actually an epic day in world history, when a brother of ours, through his outstanding leadership, uttered what is repeatedly stated as the most famous quote of World War II.﻿﻿﻿﻿﻿﻿﻿﻿﻿

﻿
On 22 December 1944, through a party consisting of a major, captain, and two privates under a flag of truce that entered the American lines southeast of Bastogne, General von Lüttwitz sent the following ultimatum to the U.S. commander there, WV Beta Brother and future SigEp Citation Recipient, (then) Brigadier General Anthony Clement McAuliffe, acting Commander of the 101st Airborne Division:


“To the U.S.A. Commander of the encircled town of Bastogne.


The fortune of war is changing. This time the U.S.A. forces in and near Bastogne have been encircled by strong German armored units. More German armored units have crossed the river Our near Ortheuville, have taken Marche and reached St. Hubert by passing through Hompre-Sibret-Tillet. Libramont is in German hands.


There is only one possibility to save the encircled U.S.A. troops from total annihilation: that is the honorable surrender of the encircled town. In order to think it over a term of two hours will be granted beginning with the presentation of this note.


If this proposal should be rejected one German Artillery Corps and six heavy A. A. Battalions are ready to annihilate the U.S.A. troops in and near Bastogne. The order for firing will be given immediately after this two hours term.


All the serious civilian losses caused by this artillery fire would not correspond with the well-known American humanity.


According to various accounts from those present, when General McAuliffe was told of the German demand for surrender he said "Nuts!" At a loss for an official reply, an aid and other American officers in the room suggested that his first remark summed up the situation quite well. The official reply:


"To the German Commander, NUTS!, The American Commander" was typed and delivered by Colonel Joseph Harper, commanding the 327th Glider Infantry, to the German delegation, and the Germans returned to their lines.


The threatened artillery fire did not materialize, although several infantry and tank assaults were directed at the positions of the 2nd Battalion, 327th Glider Infantry, where the truce party made entry. The 101st gallantly held off the Germans until the 4th Armored Division arrived to provide reinforcement. For his actions at Bastogne, Brother McAuliffe was awarded the Distinguished Service Cross by General Patton on 30 DEC 1944, followed later by the Distinguished Service Medal.


This amazing American went on to command the 103rd Infantry Division through the end of war in Europe and serve in the Korean War before retiring in 1956. He died of cancer in 1979, and respect can be paid to Brother McAuliffe at Section 3, Site 2536 in Arlington National Cemetery, Arlington, Virginia.
Submitted for your review respectfully, with reverence for Brother McAuliffe, and because the SigEp Patriots Project believes the heroic leadership of our brother on this date is important to remember, honor and celebrate.
OIF and OEF Veteran, NY Eta Brother Chief Petty Officer Ed Jones, U.S. Navy Reserve 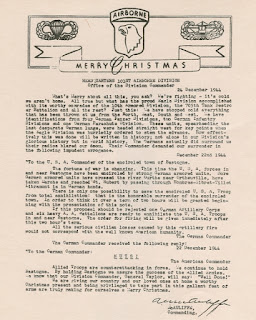 Posted by Ed Jones at 6:24 AM
Email ThisBlogThis!Share to TwitterShare to FacebookShare to Pinterest