In his later years, he truly enjoyed his work as a member of the State Board of the Michigan Special Olympics. Brother Bunbury was a member of the Macatawa Bay Yacht Club and sailed in 18 Chicago-Mackinac races, and, along with a few of his Sigma Phi Epsilon fraternity brothers, was a founding member of Cannonsburg Ski Area. 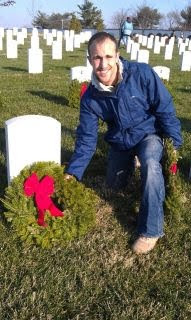 Wreaths Across America™ (WAA)
Yesterday, Wreaths Across America held more than 600 events all around the country. It was great to be part of one such event at Arlington National Cemetery other SigEps for the second year in a row, and to be able to place wreaths at the gravesite of several SigEp Patriots who gave so much so that we can enjoy our way of life.

RECENT LOSSES TO THE ROLL
* U.S. Army Veteran OH Theta Brother John Joseph Fesenmeier died 07 DEC at the age of 75 after a long and courageous struggle with a complicated, multisystem illness. Brother Fesenmeier earned a B.S. in Chemical Engineering from the University of Cincinnati and was a member of Sigma Phi Epsilon fraternity. He then earned Masters and PhD. Degrees in Chemical Engineering from Carnegie-Mellon University. John served two years in the US Army in Aberdeen Proving Ground, MD. He moved to Mobile in 1976, and was an active member of the Men of St. Joseph. Brother Fesenmeier volunteered at Providence Hospital and was a member of the Country Club of Mobile. Mass of Christian Burial will be celebrated at St. Ignatius Catholic Church at 10 A.M. tomorrow. In lieu of flowers, the family asks that donations be made to the Robin Baggett Educational Fund at any Regions Bank location or McGill-Toolen Catholic High School. Entombment will be in the Mobile Memorial Gardens Mausoleum.

* MO Zeta Brother Sergeant James L. Maynard, U.S. Army passed away on 09 DEC at his home in St. Peters, Missouri surrounded by friends and family, following a battle with cancer. Brother Maynard was born May 26th, 1934 in Logan, West Virginia. Jim served his country as a sergeant in the U.S. Army 82nd Airborne during the 1950's after which he went to SEMO in Cape Giraurdeau, MO. He was a dedicated brother of Sigma Phi Epsilon. Services: The family is being served by The Baue Funeral Home, 3950 West Clay, St. Charles, MO. A private memorial will be held by the family. In lieu of flowers please send donations to the BJC Hospice, 8300 Eager Road, Suite 500A, St. Louis, MO 63144.

SIGEP PATRIOTS PROJECT (SPP) UPDATE
* SigEps Who Serve – the official Facebook group of the SPP – would like to welcome SigEp Patriots Victor Morris and Colby Farley.

The passing of SigEp Patriots Fesenmeier and Maynard remind us that once they have died, we are unable to collect, honor and show respect to the patriotic accomplishments and sacrifices of such Brothers. This is one of several goals of the SigEp Patriots Project, and we continue to desire a mutually beneficial partnership with HQ in the achievement of this end. We hope you will reach out to Richmond to express your support for this effort, and will contact SPP with any information, comments, and /or recommendations (Sigepswhoserve@gmail.com).