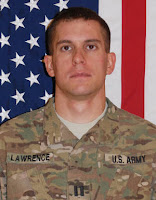 It is with great sadness that the SigEp Patriots Project announces the loss of the first SigEp in Operation ENDURING FREEDOM in Afghanistan.

Brother Lawrence died 08 OCT in Kandahar Province, Afghanistan from wounds caused by a rocket propelled grenade. Our prayers to go out to his family, friends, chapter brothers and comrades.

Update:
An article from a Nashville TN TV Station
http://www.wsmv.com/story/15657946/nashville-native-killed-in-afghanistan-attack

The news of another soldier killed in Afghanistan became all too personal for Sigma Phi Epsilon Fraternity brother Brandon Savage. He said by phone Monday, "This is someone's brother. This is someone's husband. This is someone's child. It really hits close to home. I don't have a memory in college where we weren't laughing or something," Savage said.

"When I joined Sig Ep, he was one of the upperclassmen at that time and one of the guys that everyone looked up to," Savage explained.

Posted by Ed Jones at 6:38 PM
Email ThisBlogThis!Share to TwitterShare to FacebookShare to Pinterest