These weekly works are a result of research by the SigEp Patriots Project – an effort to honor Brothers who serve/served our great Nation in the U.S. military by recording and maintaining a working history in order to recognize and respect their accomplishments and sacrifices. It is an unofficial effort and no monies are collected or requested.

We are however looking for YOU – an undergrad or alumnus – interested in being the chapter point of contact for information about military SigEps from your chapter. Any Brother can serve in this position meant to further the understanding and knowledge of the contributions to your chapter’s history by Brothers-in-arms. Drop an email to sigepswhoserve@gmail.com for more details on this effort.

“Regard your soldiers as children, and they will follow you into the deepest valleys. Look on them as your own beloved sons, and they will stand by you even unto death.” ~ Sun Tzu

Seems this lesson could also be applied to the Fraternity.

On D-Day, Brother McAuliffe was serving as Commander of Division Artillery of the 101st Airborne Division when he parachuted into Normandy. He subsequently entered into Holland during Operation Market Garden in a military glider. In DEC 1944, when the German army launched the surprise Battle of the Bulge, General Maxwell D. Taylor, commander of the 101st Airborne Division, was away, attending a staff conference in the United States. 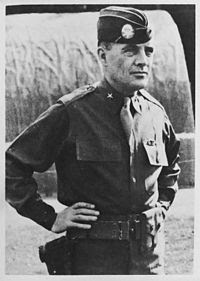 In Taylor's absence, acting command of the 101st and its attached troops fell to (then) Brigadier General McAuliffe (as pictured at left in this undated World War II photo). At Bastogne, the 101st was besieged by a far-larger force of Germans under the command of General Heinrich Freiherr von Lüttwitz.

On 22 DEC 1944, through a party consisting of a major, captain, and two privates under a flag of truce that entered the American lines southeast of Bastogne (occupied by Company F, 2nd Battalion, 327th Glider Infantry), General von Lüttwitz sent the following ultimatum to General McAuliffe:

“To the U.S.A. Commander of the encircled town of Bastogne.

The fortune of war is changing. This time the U.S.A. forces in and near Bastogne have been encircled by strong German armored units. More German armored units have crossed the river Our near Ortheuville, have taken Marche and reached St. Hubert by passing through Hompre-Sibret-Tillet. Libramont is in German hands.

There is only one possibility to save the encircled U.S.A. troops from total annihilation: that is the honorable surrender of the encircled town. In order to think it over a term of two hours will be granted beginning with the presentation of this note.

If this proposal should be rejected one German Artillery Corps and six heavy A. A. Battalions are ready to annihilate the U.S.A. troops in and near Bastogne. The order for firing will be given immediately after this two hours term.

All the serious civilian losses caused by this artillery fire would not correspond with the well-known American humanity.

According to various accounts from those present, when McAuliffe was told of the German demand for surrender he said "Nuts". At a loss for an official reply, Lieutenant Colonel Harry Kinnard suggested that his first remark summed up the situation well, which was agreed to by the others. The official reply: "To the German Commander, NUTS!, The American Commander" was typed and delivered by Colonel Joseph Harper, commanding the 327th Glider Infantry, and his S-3 Major Jones to the German delegation. Harper had to explain the meaning of the word to the Germans, telling them that in "plain English" it meant "Go to hell.”

In Memoriam
In Bastogne, there is McAuliffe Square where a “Nuts!” festival takes place every year. A bust of Anthony was unveiled in 1967 and is located next to a tank at a corner of the square.

In the 1990’s, the Nuts McAuliffe Society was formed and consists of dedicated SigEp volunteers.

A southern extension of Route 33 in eastern Northampton County, Pennsylvania, completed in 2002, was named the General Anthony Clement McAuliffe 101st Airborne Memorial Highway, and in 2009 the post headquarters building at Fort Campbell, Kentucky opened and is named McAuliffe Hall.

Our Brother left us with quite a lot to think about as to how to react and respond in incredibly stressful situations.

11 AUG 2009
On this day two short years ago today, NH Alpha Brother / Captain Timothy Francis Farrell, U.S. Marine Corps died in Frankfurt, Germany while working for the State Department as Vice-Consul in the US Consulate General in Frankfurt. Tim was 35 years old.

He was born 10 APR 1974 in Ocean Township, New Jersey. At Dartmouth, Brother Farrell was a member of the track team, and a four year recipient of the Inter Collegiate Association of Amateur Athletes of America (ICAAAA). He was also elected to the All-Ivy League Team, First Team, in 1992-1993 and 1994-1995. In 1995, he received the prestigious Nathan D. Bugbee 1925 Track Prize.

Tim joined the Marine Corps in 1997 and was a decorated Marine captain, stationed in San Diego, deployed to Japan and the Mideast. He also served on the USS Harper's Ferry as a logistics officer. He earned a Masters in International Relations at San Diego State.

Brother Farrell joined Brother McAuliffe and 21 other SigEp Patriots who are known to be buried at Arlington National Cemetery.

TOMORROW
It looks like HQ is giving serious recognition to the values and knowledge gained with military leadership and experience. On Friday, at Conclave, IN Beta Brother / Colonel Robert Lanham, U.S. Marine Corps (Retired) will be presenting “Leadership Lessons from a U.S. Marine.” It should be a great presentation.

BROTHER RETURNS FROM DEPLOYMENT TO AFGHANISTAN
This past Sunday, Operation ENDURING FREEDOM Veteran / TX Beta Brother Cory Sockwell, U.S. Marine Corps reported on Facebook that he was back in the great state of Texas following his deployment.

Welcome Home, Brother! We are all very glad you are back safe. Thank you for your service.

GOT SOME NEWS?
If you have news, accomplishments or just want to share a story please send an email to sigepswhoserve@gmail.com.

JOIN YOUR BROTHERS-IN-ARMS
SigEps Who Serve (SWS) is the Facebook presence of the SigEp Patriots Project and is the only group there created by and solely comprised of Brothers who serve/served in the U.S. military (including ROTC Cadets). This is YOUR group!

Click on http://www.facebook.com/groups/sigepswhoserve to join more than 300 of your Brothers.

Not on Facebook? Just drop an email to sigepswhoserve@gmail.com and join nearly 100 military SigEps on the Yahoo listserve. Just let us know your basic info – military affiliation and home chapter – and anything else you feel like sharing.

Also, if you know of a Brother that serves/served please let us know at the above address.

Thank you to those Brothers who have expressed kind words, comments and suggestion for the project so far at Conclave.

Posted by Ed Jones at 2:11 PM
Email ThisBlogThis!Share to TwitterShare to FacebookShare to Pinterest