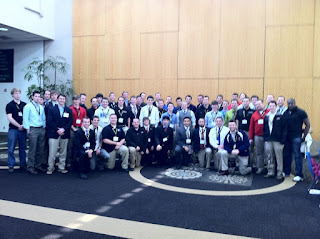 Thanks to David Stetter, Northern Kentucky University '08, Program Advisor for Greek Life and Leadership at University of Southern Indiana for reporting on the conference.

This past weekend over fifty SigEp brothers attended the Association of Fraternal Leadership and Values (AFLV) Central Fraternal Leadership Conference in association with the National Black Greek Leadership Conference. The four-day conference was held in St. Louis, Missouri, and is primarily attended by undergraduate InterFraternity Council, Panhellenic Council, and Higher Education professionals. The purpose of the conference is to encourage particpants to live the values of their respective Greek Letter Organization and to lead with integrity.

SigEp was well represented by a significant number of undergraduate leaders, as well as many distinguished alumni. Brother Dave Stollman presented his nationally recognized presentation "Buy In or Get Out" during the opening session. Brother Stollman challenged participants either embrace their organizational values or stop being a fraternity man or sorority woman.

At the closing banquet, AFLV honored Brother Dr. Chuck Eberly with the Wilford A. Butler Award. This award was established to recognize an outstanding fraternity or sorority alumni volunteer who supports the fraternal movement, but is not a Greek Life professional. Dr. Eberly has served the Greek community by leading research for the fraternity and sorority community, and has left a lasting legacy with the many graduate students he mentored to become professionals in the field.

The overall presence of undergraduate and alumni brothers at the AFLV Central Fraternal Leadership Conference is a shining example of SigEps serving as servant leaders in the Greek community.
Posted by SPEcific at 9:21 PM
Email ThisBlogThis!Share to TwitterShare to FacebookShare to Pinterest