The memorial service Saturday for Burl Rainwater, Tennessee ’58, Order of the Golden Heart, reflected a lifelong commitment to SigEp. Not only was the crowd overwhelmingly made up of SigEp alumni, but the officiating pastor was the brother who recruited Burl—and his twin brother Earl—into the chapter 55 years ago, the Rev. Brother Gordon Goodgame, Tennessee ’55, a close family friend since childhood. 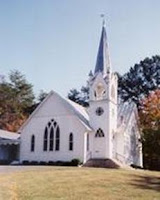 The graveside service just outside of Pigeon Forge in the Smokey Mountains was followed by a big “East Tennessee barbecue” in the open air mountainside church pavilion next to the cemetery. Earl looked over the crowd and said, “Burl would have loved to have been here. He’d never miss something like this.” It was likely the first time so many Tennessee Alpha alumni had gathered without Burl among them.

Burl was the engine behind the powerful Tennessee SigEp alumni machine which on its own awards more scholarships than many small colleges and universities. Burl built up and published the chapter’s alumni newsletter, The Spiel, for more than 30 years making it now among the longest running and best alumni magazines of all fraternities.
Rev. Brother Goodgame talked about the Christ-like love that Burl had “for everyone he ever met,” and related it to the cardinal principle of brotherly love from their days in the chapter. Burl had told family and friends that being a Brother in SigEp, and then receiving the Order of the Golden Heart, were the greatest honors of his life.

Burl was a great mentor and role model for thousands of brothers at UT and beyond. Since the time he was named our first National Alumni Chairman in 1985, I learned you could count on him to complete every task on time if not early, and always beyond any expectations for thoroughness and quality. And in keeping with Brother Goodgame’s observation, I can’t think of a single instance in which he wasn’t looking for the best interests of all involved. If he had a complaint, he was the first to call, and then he would wrap his complaint in suggestions and ideas to resolve whatever it might be—and then extend a genuine offer to help.
Among his greatest accomplishments was finding and marrying a magnificent, beautiful woman who shares the same love for the Fraternity and the men of Tennessee Alpha as he did. Our thoughts and prayers pour out for Ilene—and our thanks for sharing so much of her husband and herself over the years. Online condolences may be made at http://hosting-tributes-24616.tributes.com/condolences/leave_memory/89593455

Posted by Wordjunky at 12:58 AM
Email ThisBlogThis!Share to TwitterShare to FacebookShare to Pinterest