Shameless Self-promotion Dept.:
Trevor and  some of his entourage have been sending these releases out to anyone who might listen. We are happy to help a fellow SigEp get his shot at fame and fortune. Just remember us at the Emmys! 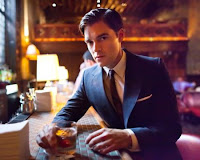 Trevor Kuhn (NV Alpha '05) served tirelessly as an undergraduate member of the fraternity. He's a Ruck graduate, National Competition Scholar, and former president of the Nevada Alpha chapter at the University of Nevada. Trevor is currently a professional actor living in New York City. Having appeared in several independent films, as well as network television shows including Rescue Me, White Collar and Royal Pains, he is well on his way to a successful acting career.

Trevor has entered a contest to win a walk-on role on the AMC television series 'Mad Men', which centers on the world of advertising in the 1960s. Please support this dedicated brother by voting for him every 24 hours until the contest ends on September 17th. He is currently in position 20 of all male contestants, and must reach the top 10 finalists in order to be considered for a role.

Vote today and everyday at http://madmencastingcall.amctv.com/browse/detail/55F27R. And feel free to share this link with many others to increase Trevor's chances of winning.

Posted by Wordjunky at 11:38 PM
Email ThisBlogThis!Share to TwitterShare to FacebookShare to Pinterest