So much for "Old South Days" 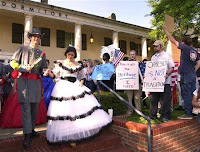 The Virginia-based Kappa Alpha Order issued new rules to chapters earlier this year saying members aren't allowed to wear Rebel uniforms to parties or during their parades, which are a staple on campuses across the South.


In the memo to chapters, Kappa Alpha's national executive director, Larry Wiese, said such displays had to end.

"In today's climate, the Order can ill afford to offend our host institutions and fend off significant negative national press and remain effective at our core mission, which is to aid young men in becoming better community leaders and citizens," Wiese wrote.

The big question: Is this being aware and sensitive to cultural diversity and historical issues, or is it political correctness taken to an absurd degree?

We ain't touchin' it, but can't wait to read the comments.