TX Alpha SigEp may be next Senator

This just in from former Grand President Gary Griffith:
"Reading the Houston Chronicle story (link below) it appears that Texas Alpha Brother Michael Williams (Renaissance - 2008) is a final contender for appointment to the US Senate that should come in next 60 days. If Michael receives the appointment from Governor Perry we need to mobilize to help him stay there.
Gary" 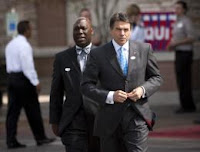 Railroad Commissioner Michael Williams is emerging as a favorite to be named as U.S. Sen. Kay Bailey Hutchison's successor if she resigns to run for governor, creating the possibility he could become the first black U.S. senator from Texas.

If chosen by Gov. Rick Perry, Williams also would be the only black Republican in a Senate where the GOP is battling the nation's first black president on health care and global warming. The only other black senator is a Democrat from Illinois who replaced President Barack Obama. If appointed, Williams would be only the fifth black to serve in the Senate since Reconstruction.