The Balanced Man Celebration was not exactly the highlight of my Conclave. 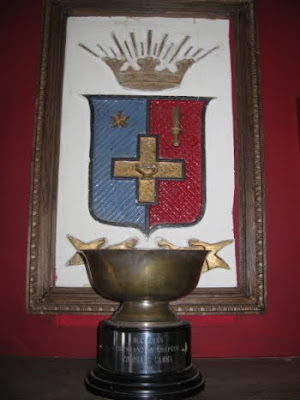 To start, as the buses were pulling up to take us to the Hard Rock auditorium there was an afternoon deluge. Of course they pulled up to the only pick-up area without a covered walkway. As brave souls were getting soaked, "Mom Nonnie" was berating a poor staffer in her best "you ruined your suit in the mud!!!" MOM VOICE. I almost felt sorry for the lad. Almost. As you might suspect, just when the staff had moved the buses to a covered area, the rain magically stopped.

At the hall it seemed like everyone simply went through the motions. Oh sure, all the elements were there:That's right, Steve Shanklin entered in smoke and fire, with booming music and a stirring voice over imitation of Michael Buffer. Sadly, in stead of a stirring call to action or a confidence building talk about all the accomplishments of the last two years, we got a tired list of "we must..." followed by platitudes and ideals and delivered in a droning monotone not heard since Ben Stein called for "Bueller, Bueller? Ferris..Bueller?". Don't get me wrong, I like Bro. Shanklin, but this was not his best work.

That bit of inspiration was followed by the presentation of the Buchanan Cups. Forty. Three. Cups. for those of you doing the math at home that means that something like one out of six (or possibly seven) chapters is "Excellent". I know we want to think every chapter is "excellent," but isn't this award starting to look like an "everyone gets a trophy" kiddy soccer league?

Lastly, two men were awarded the "Sigma Phi Epsilon Fellow" honor. The two Fellows undoubtedly worked hard to achieve their success and I can only congratulate them on their success.

Back at the hotel, I finally found guys from my home chapter - they had just arrived and were thus spared the embarrassment of not getting a trophy, er, cup. Schmoozing for the rest of the night. Now to bed.
Posted by Wordjunky at 12:42 AM
Email ThisBlogThis!Share to TwitterShare to FacebookShare to Pinterest