Frat house set to re-open after fire
The Daily Reflector 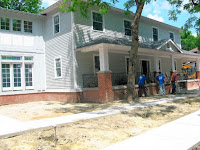 The East Carolina University Interfraternity Council and Student Government Association will formally welcome Sigma Phi Epsilon back to campus after a January fire destroyed part of the fraternity's living quarters at Fifth and Summit streets.

Community members, ECU staff and faculty, and many Greek alumni will join students in an event to celebrate Sigma Phi Epsilon's new home, according to a university news release.

The program will emphasize the new safety precautions that Sigma Phi Epsilon has taken to make the home one of the safest in the country, the release said.

ECU Environmental Health and Safety as well as ECU Student Legal Services will distribute information throughout the event.

The new structure will be open from 3-6 p.m. for tours, and the program will begin at 5 p.m. The event is open to the public.

“After the horrible incident in the spring, Sigma Phi Epsilon is now able to be a campus-wide leader in fire safety. Their new house will be equipped with all tools needed to keep students safe in the case of a fire,” he said.

On the morning of Jan. 30, a fire destroyed the two-story auxiliary house being leased by the fraternity and located behind the main fraternity house. Nine students living in the house were safely accounted for after the fire. One student was treated for burn injuries.

Posted by Euripides at 5:33 AM
Email ThisBlogThis!Share to TwitterShare to FacebookShare to Pinterest