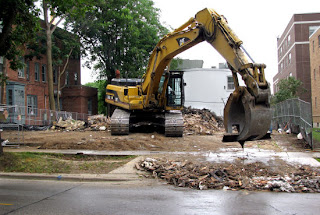 The Sigma Phi Epsilon fraternity house at 237 Langdon St. is being torn down this week. It was destroyed in a fire in May 2008.

The historic Sigma Phi Epsilon fraternity house at 237 Langdon St., destroyed by an early morning fire in May 2008, was razed this week with the site’s future still unknown.

Ryan Sugden, vice president of operations for the Sigma Phi Epsilon Alumni Board, said the fraternity just recently reached a settlement with the insurance company.

Sugden said the fraternity is looking at options for the site. “Right now the likeliest option is rebuilding,” he said, “but it will be a greenscape until we decide.”

Members of the Wisconsin Beta Chapter of Sigma Phi Epsilon have been sharing space in the nearby Tau Kappa Epsilon fraternity house since fire destroyed the 8,000-square-foot house.

The house had been occupied by Sigma Phi Epsilon since 1995. Built in the early 1890s with two stories, the top levels were added in 1910 by a university professor.

The Madison Fire Department has not released a cause for the blaze.

Posted by Euripides at 6:00 AM
Email ThisBlogThis!Share to TwitterShare to FacebookShare to Pinterest