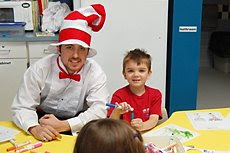 The children of First Step at Kingston's pre-K program got a special surprise on Friday in celebration of Dr. Seuss' birthday, as they were joined by University of Rhode Island Sigma Kappa and Sigma Phi Epsilon volunteers-and one Cat in the Hat.

The 20 volunteers crowded the brightly lit classroom for an hour of reading and activities in honor of what would have been the 105th birthday of Dr. Seuss, a famous SigEp, and staple of children's literature.

The 18 children, aged 4 to 5-years-old, sat cross-legged and transfixed on the carpet, while Sigma Kappas joined them on the floor and SigEp volunteers sat in tiny, kid-friendly desk chairs.

The event began with reading along to the Dr. Seuss classic, "The Cat in the Hat."

"The Cat in the Hat," played by junior Jim Elliott, Sigma Phi Epsilon's vice president of programming, came to read the story aloud. Dressed in a tall red and white striped hat, white dress shirt and red bowtie, he was met to enthusiastic pointing and exclamations from the audience.

"I have the same birthday [as Dr. Seuss]," Elliot said. His mother, who used to dress up in honor of her son's birthday, sent the Cat in the Hat costume to him for the occasion.

During the reading, the URI volunteers pointed out the colorful pictures, as the children shouted out guesses about what surprises in the plot were coming next. The children readily offered up opinions and questions to their honorary readers.

"That rhymes," one attentive listener noticed, at Thing One and Thing Two's appearance. Later in the story, when the Cat in the Hat balances on a ball for the entertainment of Sally and her older brother, a young boy inquired, "Can you do that?" to Elliot.

Also to the delight and laughter of the audience, Elliot lifted his own striped cap in accordance to the Cat tipping his iconic hat.

After a round of applause at the completion of the story, the children and URI volunteers sat at plastic tables, to color pictures of various Dr. Seuss characters. The kids could choose from Cat in the Hat and Grinch door hangers, various coloring pages and connect the dot activities.

At the tables, the conversation among the First Step and URI students seemed carefree.

"Can you guess how old I am?" Sigma Kappa member, Val Shapiro, said to the group. A boy to her right, after much deliberation, held up five fingers. After he had run out of fingers to count on, her age, 19, was revealed, much to the shock of the students.

The children and URI volunteers discussed much more besides their age differences. They debated whether or not the Grinch was "scary," talked about their siblings and families and shared opinions on their favorite Dr. Seuss books and the "Horton Hears a Who" movie. After the projects were completed, the children took to stacking the Crayola markers into towers, while the taller SigEp volunteers helped steady their creations.

"This is all I ever did in pre-school," joked SigEp member John Collins, as he watched the children rebuild after the tower toppled.

"We're happy to have volunteers come in, the kids love it," Cassi Braga, the pre-K instructor, said. "And we're studying Dr. Seuss next week, so this was perfect."

For the two Greek houses, pairing up seemed natural.

"Dr. Seuess was a SigEp, and he married a Sigma Kappa, so that's why we decided to team up," freshman Jen Debruno, the philanthropy chair for Sigma Kappa, said. This celebration is in its second year, but Friday marked the first time the groups traveled to the pre-school.

"Last year we did it at the [campus] library, but only a few kids came," Elliot said. Sigma Kappa and SigEp Epsilon decided to travel to where the kids already were, and they considered this year's efforts to be a success.

"We'll definitely be doing it again. I think it went really well, the kids are so energetic and cute," Debruno said.
Posted by Euripides at 6:55 PM
Email ThisBlogThis!Share to TwitterShare to FacebookShare to Pinterest