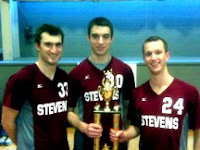 HOBOKEN, N.J. (May 14, 2009) – Senior Michael Bertucci, a Chemical Biology major with a minor in Social Sciences, has been named Valedictorian of the Stevens Institute of Technology Class of 2009. Graduating first in the class, Michael will address his fellow graduates at the 2009 Undergraduate Commencement Ceremony on May 21, 2009. Actively involved in many aspects of life at Stevens, Bertucci has made numerous contributions to the Stevens community. He is a stellar volleyball player and academic standout.

A student coach of the women’s volleyball team for the past three years, Bertucci is also involved in the Sigma Phi Epsilon fraternity, the American Cultural Club, the Alpha Phi Omega service fraternity, the Student Athletics Advisory Committee (SAAC), and serves as president of Gear and Triangle. Always a champion for getting involved, Michael also served as an Orientation Leader, welcoming new students to Stevens and encouraging them to be active participants in the campus community. As a featured speaker at the Class of 2013 Accepted Students Reception, he was chosen to share his Stevens experiences in an address to prospective students and their families.

The full article is here:
Men's Volleyball Release - Stevens Ducks
Posted by Wordjunky at 12:32 PM
Email ThisBlogThis!Share to TwitterShare to FacebookShare to Pinterest