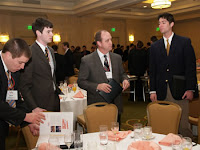 Arron Granger, The Marketing Communications director for Sigma Phi Epsilon, has released the following update on the search for a new HQ Executive Director:

RICHMOND, VA, March 26, 2009—The Board of Directors of Sigma Phi Epsilon Fraternity today announced the appointment of Doug Scheibe as interim executive director, effective April 17, 2009. Scheibe, who will continue as executive director of the Fraternity’s Educational Foundation, will serve after the departure of Craig Templeton, who will leave the post after almost nine years. The Board has retained the services of Washington-based Spencer Stuart to launch a nationwide search for a permanent executive director, and Scheibe will provide organizational leadership and operational oversight during this transition. He will continue to manage the Foundation and be responsible for all Foundation initiatives and campaigns.

Sigma Phi Epsilon Grand President Steve Shanklin said, “Craig leaves a legacy of leading the Fraternity to tremendous growth and in its strongest financial position since its founding. We are grateful for Craig’s long-term service, his commitment to a thoughtful transition and his support in the search. We are fortunate to capitalize on his working relationship with Doug to provide seamless continuity while we conduct an open and thorough search.”

Foundation President and Chairman Don Hudler said, "The Foundation will remain focused, and we are happy to be supportive during this short-term situation. We look forward to working with the fraternity’s new executive director as we did working with Brother Templeton. We wish Brother Templeton well in all his future endeavors and we thank him for his service and commitment to Sigma Phi Epsilon."

Posted by Wordjunky at 11:36 AM
Email ThisBlogThis!Share to TwitterShare to FacebookShare to Pinterest