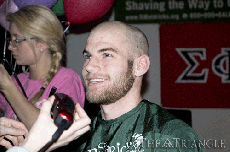 All proceeds go to cancer research for St. Baldrick's, as well as to the Children's Hospital of Philadelphia, from which a speaker, Carly Varela was present at the event. Varela's funding comes from the St. Baldrick's Foundation.

According to Vice President of Programming for the fraternity, Adam Carlson, the event began two years ago when one of the brothers decided to get involved with the foundation. Originally held at Fado's pub in center city, the event expanded to include a large number of brothers, and currently involves almost the entire fraternity.

"In two weeks, we got almost everyone to shave their heads," Carlson, a pre-junior electrical engineering major, said. "

At the time, it was the largest fundraising event Drexel had seen from an organization."Brian Schlosnagle, special events chair and pre-junior architectural engineering major, said the fraternity nearly doubled the amount of participants this year to 90 brothers, up from 49 brothers last year. Natalie Shaak, assistant director of Fraternity and Sorority life will be shaving her head as well.

The brothers are expecting a turnout of at least 200 students for the show, as well as some last minute participants who will shave their heads."

Last year, some people just got inspired and did it on the spot," Carlson said. "We're hoping to see that again this year."

Brothers from the Lehigh and Westchester chapters of Sigma Phi Epsilon will also be participating in shaving their heads, according to Carlson and Schlosnagle.

Carlson said nearly every member of the fraternity is in some way involved with the event.According to Carlson, the fraternity decided to be the event holders last year, and raised almost $22,000. This year, the organization has surpassed their goal of $25,000, raising almost $26,000 at the event.

"With the economy and everything, we set it at $25,000, but I have full confidence that we can make it," Carlson said.

Fundraising for the event has come from a variety of efforts, including online donations and more."We have almost $20,000 in electronic donations," Carlson said.

According to Schlosnagle, the Penny Wars hosted through RLO in the residence halls helped raise about $2,300, and he expects to raise another $2,000 or $3,000 from the event itself.
Posted by Euripides at 9:04 AM
Email ThisBlogThis!Share to TwitterShare to FacebookShare to Pinterest