All eight of the students living in the building near the campus of Eastern Carolina University escaped without serious injury. One student was treated for second degree burns and one of three pet dogs did not survive the blaze. 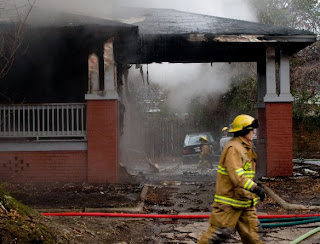 Authorities now say a total of 14 students escaped a burning fraternity house this morning, some by climbing through windows and dropping from rooftops.

The two-story annex of the Sigma Phi Epsilon fraternity caught fire about 6:20 a.m., according to witnesses and officials on the scene. The house is on Summit Street near Fifth Street across from ECU's main campus.

Nine students reside in the home — called the back house because it sits behind the main fraternity building — and eight of them were present at the time of the fire, said Keith Tingley, assistant director of Greek Life.

HQ has released a statement also.
Posted by Wordjunky at 4:10 PM
Email ThisBlogThis!Share to TwitterShare to FacebookShare to Pinterest