Minnesota Greeks Light Up for the Holidays

U fraternities light up the row
By James Anderson 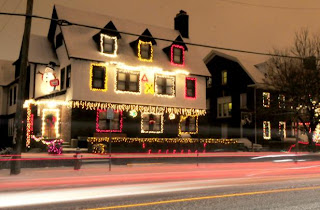 In the past week, University Avenue has been injected with a little holiday spirit.“Light up the Row” is an event created by TJ Pelanek of Phi Kappa Psi where participating University of Minnesota fraternities are having a competition to see who has the best holiday lights display.

Pelanek partnered with the greek honors society, Order of Omega , to organize the event.

Sororities had a week to see each fraternity’s display of lights and vote online for the best house.
Voting will conclude Monday.

The 15 participating fraternities paid a $20 entry fee, and the winning house gets the whole $300 to donate to a charity of their choice.The competition was also open to the fraternities in Marcy-Holmes and St. Paul.Pelanek said because the event is new, he wanted to surprise the rest of the University with the lights that many fraternities put up a week ago.

Pelanek started planning the event with Order of Omega in late October.Alex Coontz , president of Order of Omega, said he knew Pelanek’s idea had a lot of potential and wanted to provide him with the necessary resources to make it a success.

Order of Omega secretary Megan Hines said the charitable donation was an important idea, particularly in these current economic times.“Especially this time of year and during this financial strain, a lot of organizations, especially nonprofits, are really struggling for financial backing right now,” Hines said.

Pelanek said the event will continue next year, but it will be called “Battle of the Bulbs” so it does not sound as if it is restricting the competition to just the University Avenue fraternities.

Pelanek said the winner will be announced during the Greek Awards in the spring. There is also a greek award for philanthropy that could hinge on the winner of this event.Pelanek expects the event to be even bigger in coming years, with the potential of raising the entry fee and allowing sororities to compete.
http://www.mndaily.com/2008/12/06/u-fraternities-light-row
Posted by Euripides at 4:22 PM
Email ThisBlogThis!Share to TwitterShare to FacebookShare to Pinterest