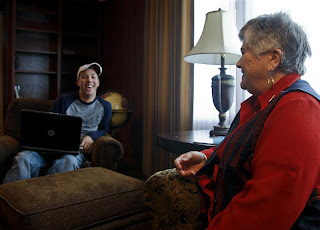 Patricia Lockwood, live-in house mom of the Sigma Phi Epsilon, right, sits and talks with sophomore Cory Mason on Wednesday afternoon at the Sigma Phi Epsilon house. Lockwood spends time talking with the men in the house, many of whom admit sneaking Tootisie Pops from the bowl next to her door.

Southwestern knick-knacks are scattered among novels on tan bookshelves. A cactus in the window is the perfect accent to the stucco pink walls and matching plush couch.

This is the bedroom of Patricia Lockwood, the live-in house mom with Sigma Phi Epsilon. Seven fraternities at IU have house moms, but she is the only one who actually lives in the fraternity house, Lockwood said.

This is Lockwood’s first year living in the fraternity. Although she has been a house mom at various sororities since 1991, she said the transition to living with college-age males has been smooth.“It’s been relatively easy because they’ve all been so open,” Lockwood said. “I feel respected. I feel loved. I feel like a real mom.”

One member of the fraternity said it is easy to be open with Lockwood because she is such a good addition to the house.

Because the fraternity is new to the house and many renovations are taking place, Lockwood assisted in many of the house director roles. This includes seeing that the house runs efficiently, supervising the budget and acting as hostess for events involving parents or alumni.

“The house director has many hats to wear,” she said. “Sometimes it is difficult to be effective.

”While Lockwood’s role is not designed to be that of house director, she assists other members in their responsibilities.

Members with leadership roles are in charge of major functions of the house like communication or the kitchen. Lockwood helps guide these managers in their roles.

“I just keep everyone informed and up-to-date,” she said. “The guys here really take their responsibilities seriously.”

On a daily basis, Lockwood focuses on staying ahead of schedule. She balances clerical work, communication between members of the house and spending time bonding with the members.“There is no typical day,” Lockwood said.

“I eat lunch and dinner there, but what happens in between is up for grabs.”

Lockwood has grandchildren older than the members of the house, so keeping up with the high-energy, chaotic lives of college men can be exhausting. She has learned to recognize when she needs to step back and take some time for herself.

“I just get tired enough, and suddenly I say to myself, ‘It’s time to go to a movie,’” she said.

Before becoming involved with greek life, Lockwood earned a degree in elementary education and had jobs in interior design and with an airline.

“One day, I just found that I had to narrow down into a career,” Lockwood said.

A career counselor suggested she look into being a house director, because of her experience raising her four daughters, nine grandchildren and three great-grandchildren.

Lockwood wasn’t greek in college, and neither were any of her children. But now that her daughters have grown up and moved away to various parts of the country, she can see the benefits of greek life.

“I see the advantage of the greek system being that you have a home – it can be a feeling of family,” she said.

Although she is from a different generation than the men in the house, Lockwood keeps up with the times to try to relate to the brothers.

“You can’t get stuck in the past and expect to have any rapport with the young people you are living with,” she said.

Showing their feelings, though, is not always negative. Senior Brian Burkhammer, chaplain of the fraternity, said Lockwood is a great feminine influence in the house.“She’s always someone you can go talk to if something’s not going well,” Burkhammer said. “In a house full of guys, that’s nice.”

Lockwood has no reservations about making the fraternity part of her family.“Who doesn’t want to get hugged three or four times a day?” she said.

Lockwood has taken heart to being the mother figure for the group, and she feels the boys have bonded with her as well. They will stop by and visit her in her room whenever the door is open and sit at her table to chat with her at dinner.“I just have to pinch myself,” she said. “I love it here.”
Posted by Euripides at 6:35 AM
Email ThisBlogThis!Share to TwitterShare to FacebookShare to Pinterest