Houston Mayor Bill White was the guest speaker at this year's presentation of the Texas Delta chapter's 2008 Balanced Man Scholarship. 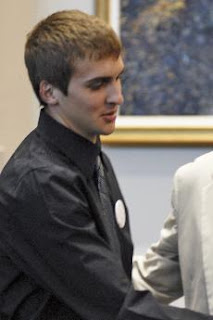 Mayor Bill White said Thursday night at the Sigma Phi Epsilon's Balanced Man Scholarship Reception that leaders are people who do the best with what they have.

"My greatest musical achievement was getting to play at Carnegie Hall," said Frank, who wants to study medicine at Johns Hopkins University or Harvard University.
[...]
The William "Buck" Caulfield II Balanced Man Scholarship has been awarded to promising incoming freshman from the Delta chapter of Sigma Phi Epsilon since 1993. The scholarship is funded by an endowment from William Caulfield, former chapter advisor.