Fraternity to rebuild by fall 2010
by Kevin Bargnes
Wednesday, August 6, 2008 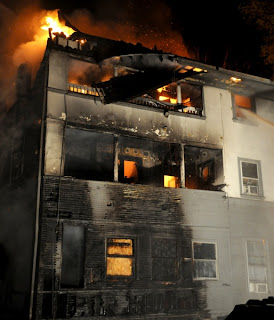 The largest fraternity on the University of Wisconsin campus expects to have a new home by 2010 after a late-night blaze destroyed their residence and caused more than $1 million in damage last May.

A fire reportedly caught near the base of the Sigma Phi Epsilon house at 237 Langdon St. last May, burning most of the second and third floors until the Madison Fire Department was able to stop the flames.

Ryan Sugden, vice president of the SigEp alumni board, said the fraternity expects to open a new, state-of-the-art house on the same property as the old building by fall 2010.

Twenty SigEp members will be sharing space with Tau Kappa Epsilon this academic year, and officials said they hope to rent their own house on Langdon Street for 2009-10.

The city of Madison has deemed the burned house unstable, and the fraternity is seeking approval to demolish it. While Sugden said he hoped it would be done by the end of the summer, demolition will likely not begin until September.

Sugden said he predicts the fraternity’s incoming rush classes to drop as a result of the fire but expects to remain one of the largest fraternities on campus.

“We will not use the fire as an excuse to explain away any drop in recruitment or any drop in the good actions we do on campus, including our philanthropic events and community service,” Sugden said.

“It’s a long process, but at the end we’re going to have a pretty cool-looking house,” Miesen said, adding an extensive library and a gym may be a part of the new SigEp residence.

MFD has yet to determine the cause of the fire, and Sugden said an independent investigation by the fraternity’s insurance company found the fire started outside the house.

But MFD spokesperson Bernadette Galvez said the department has not ruled any of the possibilities out and that the investigation is still ongoing.

Nearly all members living in the house at the time of the fire had insurance to cover their losses, which Sugden said for totaled nearly $20,000 for some fraternity members.

The Badger Herald - Fraternity to rebuild by fall 2010
Posted by Euripides at 5:40 AM
Email ThisBlogThis!Share to TwitterShare to FacebookShare to Pinterest