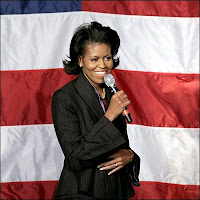 Michelle Obama has accepted an invitation to become an honorary member of Alpha Kappa Alpha, ending weeks of speculation on historically black college campuses about which, if any, sorority she would join.

Ms. Obama did not join a sorority while a undergraduate at Princeton, and Alpha Kappa Alpha, which was founded at Howard University in 1908, did not have a chapter on the campus at the time.

The sorority, which also counts Brown University President Ruth J. Simmons among its honorary members, told the New York Times that once Mrs. Obama is inducted into the sorority, she cannot join any of the other “divine nine,” as black sororities and fraternities are often called.

But a spokeswoman for Ms. Obama said that her membership was non-exclusive.
“She looks forward to working with all of them to help bring change to their communities,” the spokeswoman told the Times.
Posted by Euripides at 1:15 PM
Email ThisBlogThis!Share to TwitterShare to FacebookShare to Pinterest