Randy Pausch was not a SigEp, and we missed a good guy there. A professor of Computer Science at Carnegie-Mellon, his "Last Lecture" video and book (the book is listed in the "S&P Recommends" section) were a source of inspiration for many students and teachers - and even those in the 'real world.' Professor Pausch died early Friday at his home in Virginia. 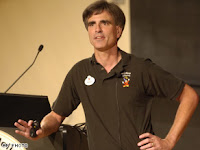 Pausch was diagnosed with incurable pancreatic cancer in September 2006. His popular last lecture at Carnegie Mellon in September 2007 garnered international attention and was viewed by millions on the Internet.

In it, Pausch celebrated living the life he had always dreamed of instead of concentrating on impending death.

"The lecture was for my kids, but if others are finding value in it, that is wonderful," Pausch wrote on his Web site. "But rest assured; I'm hardly unique."
[...]
At Carnegie Mellon, he was a professor of computer science, human-computer interaction and design, and was recognized as a pioneer of virtual reality research. On campus, he became known for his flamboyance and showmanship as a teacher and mentor.

The speech last fall was part of a series Carnegie Mellon called "The Last Lecture," where professors were asked to think about what matters to them most and give a hypothetical final talk. The name of the lecture series was changed to "Journeys" before Pausch spoke, something he joked about in his lecture.

"I thought, damn, I finally nailed the venue and they renamed it," he said.

He told the packed auditorium he fulfilled almost all his childhood dreams -- being in zero gravity, writing an article in the World Book Encyclopedia and working with the Walt Disney Co.

The one that eluded him? Playing in the National Football League.

"If I don't seem as depressed or morose as I should be, sorry to disappoint you," Pausch said.
[...]
"I mean I don't know how to not have fun. I'm dying and I'm having fun. And I'm going to keep having fun every day I have left. Because there's no other way to play it," he said in his Carnegie Mellon lecture. "You just have to decide if you're a Tigger or an Eeyore. I think I'm clear where I stand on the great Tigger/Eeyore debate. Never lose the childlike wonder. It's just too important. It's what drives us."

Well, said. Many of us, myself included, spend far too much time being Eeyore. I think I'll try to be more Tigger from now on.


'Last Lecture' professor dies at 47 - CNN.com
Posted by Wordjunky at 10:10 AM
Email ThisBlogThis!Share to TwitterShare to FacebookShare to Pinterest