The New York observer has apparently read Scott McClellan's book, which is more than I have done. I did, however skim their review of it and gleaned this little-known tidbit: 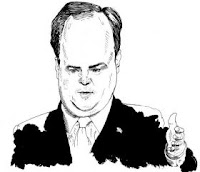 "PROPERLY EXECUTED, the White House memoir is an art form crafted according to a carefully established set of rules. The protagonist must present himself as having arrived in Washington a naif, come only to serve president and country. He may include formative episodes that establish his purity and strength of character. Mr. McClellan writes that while attending the University of Texas, he resigned as president of Sigma Phi Epsilon to protest the fraternity’s practice of hazing pledges."

Just a hunch, but I don't think The NYO is impressed with the book...

The other big problem with What Happened is Mr. McClellan’s failure to credibly account for his belated volte-face. Why didn’t he speak up sooner? If he doubted the "propaganda campaign" and the war it launched, then why not resign in protest? This is, after all, a man who quit Sig Ep because drunken freshmen were being paddled—yet he chose to remain in the White House until his ineptitude violated even the perilously low standards of the Bush administration and he was shown the door.

Maybe he should have sponsored a Spelling Bee?

The Lackey's Revenge | The New York Observer
Posted by Wordjunky at 9:42 AM
Email ThisBlogThis!Share to TwitterShare to FacebookShare to Pinterest