You just have to hate it when one of our chapters is shown in an unflattering light. Whether this fits the definition of "hazing" is a question that begs a distinction without a difference. Every action is grist for the mill of public opinion. It does not matter what is "really" happening - people will believe what their expectations tell them. 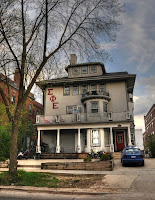 The University of Wisconsin’s dean of students office and the Interfraternity Council are investigating allegations of hazing by members of a campus fraternity.

Mike Miesen, president of the UW chapter of Sigma Phi Epsilon, said the incident did not constitute hazing and occurred after the conclusion of other non-hazing initiation events. The bucket incident was not sanctioned or supervised by fraternity leadership, he added.

“This action was irresponsible and immature. The leadership including myself do not condone this sort of action,” Miesen said. “We are a non-hazing fraternity — Sigma Phi Epsilon doesn’t haze. We have a very proud system that makes them feel like they are not being hazed.”

[An] anonymous source said it appeared the fraternity was holding a “hell week” with lookouts near the fraternity doors, adding the event was clearly “unbecoming of a Greek.”

“They were there in their boxers and having shit dumped on them. There is no conceivable way this isn’t hazing of some sort,” he said. “Anybody who knows anything about the Greek community and thinks it’s not hazing is delusional.”
[...]
In a statement, the UW Sigma Phi Epsilon Alumni Board said they have been assured the event did not involve hazing of new members and were “inappropriate, unacceptable and will not occur again.”

“The actions that took place outside of the Sigma Phi Epsilon fraternity house on Friday, May 2 were inappropriate and do not represent the values and beliefs that Sigma Phi Epsilon represents, nor the values of the Greek system at UW-Madison,” the board said in the statement. “The Sigma Phi Epsilon Alumni Board will work with the undergraduate chapter and its leaders to ensure that this conduct ends and does not occur again.”

Are there 'traditions' at your chapter that an anonymous passer-by would think are innappropriate? How do you justify them? Could you argue in their defense to your Greek advisors?

The Badger Herald - UW probes frat after allegation of hazing event
Posted by Wordjunky at 10:29 AM
Email ThisBlogThis!Share to TwitterShare to FacebookShare to Pinterest