Update: Thanks to this eyewitness blog report for the picture which we totally stole!
Another blog has several pictures.
A TV news site with video
The University of Wisconsin Greek system has a page with all the latest updates. 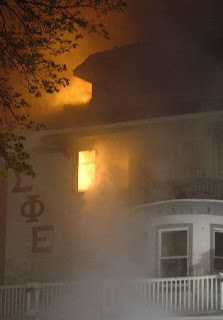 Instead of cramming for finals, 25 members of the Sigma Phi Epsilon fraternity sat on a Metro Transit bus early this morning at the corner of Langdon and Frances streets keeping warm as dozens of Madison firefighters battled a massive fire that enveloped their fraternity house.

"It's good to know everybody's out and safe," she said at the scene as the firefighters behind her pumped 1,000 gallons of water a minute into the top level of the three-story wooden house at 237 Langdon St.

The investigation into the fire was just beginning Tuesday morning as firefighters continued to put out hot spots and were most likely to be on the scene throughout the morning.
"We're just being able to get inside the building," Galvez said. "We still have a ladder up, putting out spot fires."

No cause of the fire had been determined yet. The Madison Police Department is assisting in the investigation.

Fire Chief Debra Amesqua ordered all of the firefighters to leave the house because she feared structural collapse, Galvez said.

"A lot of fire was coming out of that building," she said. "Once fire gets into the attic, that's free space for it to burn."

The fire was put out about three hours later at 2:38 a.m. A cause won't be determined for a few days, Galvez said.

Police officers sealed off Langdon Street at Frances Street, so spectators wouldn't get in the way of the firehoses. About 100 onlookers, mainly students, gathered at the corner. Dozens more congregated in front of the Campus Inn, where the bus was parked sheltering the fraternity brothers.

Langdon Street was still blocked by fire equipment at 6 a.m. Madison police said the street will most likely be blocked through the morning commute, so motorists should use alternate routes.
"It's still smoldering," said Division Chief Arthur Price. "There's still smoke and steam coming out of it."

Price said it was hard to say just how long firefighters would remain on the scene.

"It's an old, Victorian building," Price said, "with a lot of nooks and crannies. We want it out."
The Madison Fire Department sent 14 vehicles to the fire and a total of 48 personnel, including chiefs, Galvez said. One firefighter suffered a non-life-threatening injury and was taken to UW Hospital, and another suffered from dehydration and exertion, she said.

The Sigma Phi Epsilon house, built in the 1890s, is nestled into the bend on Langdon Street. Emergency workers evacuated the two buildings on either side of the house, neither of which was damaged by the blaze. Residents of the neighboring buildings were allowed back in at 3 a.m.
The 13-bedroom house was completely repaired after a fire in the summer of 1999 that caused $500,000 in damage. Because it was summer, there were only six residents and one guest staying at the house at the time.

"This is the different in that it's a total loss," said Ryan Sugden, vice president for the Sigma Phi Epsilon alumni board, who lived in the house from 2003 to 2005. This time, there were 25 fraternity members living in a house that at maximum occupancy can house 30, Sugden said.
"It's a total loss. Nothing will be recovered from that house," he said.

Sugden said that after the 1999 fire a new fire alarm system was installed in the house. "That played a role in getting all the residents out safely," he said.

The building did not have a sprinkler system, he said, a fact pointed out by Galvez, the fire department spokeswoman, who said that all newer construction student housing has sprinkler systems.

Ald. Eli Judge, who represents the UW campus and lives across the street, began to smell smoke and hear sirens at 11:50 p.m. He went outside and saw the back of Sigma Phi Epsilon on fire.
"Almost immediately, fire trucks started pulling up. I think the fire department's done a remarkable job tonight, especially with the nature of these old houses in the Langdon area," he said.

As a student, Judge sympathized with the fraternity members. "It doesn't help that it's the middle of finals week," he said.

Sugden noted that more than half of the victims have finals Tuesday.

UW-Madison Dean of Students Lori Berquam was also concerned about the impact of finals week and pointed out that the victims will not be able to access the materials they need to study.
"Most of them were only able to get out with the clothes on their back, maybe their bookbag, so we wanted to certainly support them during this terrible situation and give them the resources that they need to carry on," she said.

Berquam said the fraternity members all indicated that they had friends to stay with immediately and didn't need Red Cross support. "Where they will be staying in the coming days, that we need to work on," she said.

Argyle Wade, associate dean in the Offices of the Dean of Students, said his office will issue checks from the "Student Crisis Loan Fund," a fund established for emergencies through private donations. The fraternity members will be able to purchase what they need -- clothing, food, housing and other basic essentials -- to get them through finals, Wade said.

His office will also be contacting the students' professors to ask for further assistance in helping the victims complete their class work for the rest of the semester. Health services and counseling services on campus will also continue to make resources available, he said.

"Beyond that, it's working one-on-one. Each student will have unique needs," Wade said.
The fraternity made news last week as UW-Madison officials investigated a possible reverse hazing incident at the frat in which human excrement and vomit were dumped on fraternity members.

Sugden said he was grateful for all the help and concern at the scene. "The support from the community -- from the dean of students, students, the Red Cross, Madison police and fire -- has been overwhelming and very much appreciated," he said.

He said that for the hundreds, if not more than 1,000, "Sig Eps" who have lived in the house and used it as a fraternity home for the past 10 or so years, the house holds a lot of history and memories.

"It's a tough loss for us, but thankfully everybody is out safely. That's the most critical aspect of this."
Posted by Euripides at 1:01 PM
Email ThisBlogThis!Share to TwitterShare to FacebookShare to Pinterest