Yeah, this is another non-fraternity piece, but please read it anyway - because it is a damn good story, it is recent, and it's about a basketball star at my school.

Chris Lofton has beaten the odds his entire life. 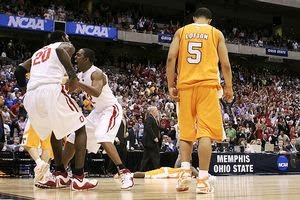 Click picture to enlarge with caption
One of the most prolific 3-point shooters in college basketball history, Lofton can still recite all of the things he supposedly wouldn't or couldn't do when he came out of Maysville, Ky., four years ago.

When it came time to pick a college, despite earning the prestigious Mr. Basketball honor in the state of Kentucky, Lofton was spurned by the two basketball powerhouses in that state -- Kentucky and Louisville.

Undaunted, Lofton headed south and carved out a record-setting career at Tennessee -- one that helped put the Vols back on the basketball map. The 6-foot-2 guard, who looks about as unassuming on the court as the team equipment manager until you see him shoot the ball, was in many ways the face of the Vols' renaissance in men's hoops. They won a school-record 31 games this past season, vaulted to No. 1 in the polls for the first time in school history and made their second straight Sweet 16 appearance.

It was truly a memorable career, one that Tennessee coach Bruce Pearl guarantees will someday lead to the retiring of Lofton's No. 5 jersey.

But Lofton's greatest conquest came off the court.

The three-time All-American, in an exclusive interview with ESPN.com, revealed for the first time publicly that he played his senior season at Tennessee after undergoing surgery to remove a cancerous tumor from one of his testicles in March 2007.

That's right. He played his senior year for a team that had a #1 ranking - and was a star player - while dealing with the effects of cancer surgery and chemotherapy. And almost no one knew about it.

It's the way he wanted it. An intensely private person, he internalized everything and was hell-bent on nobody being able to make excuses for him.

Chris Lofton considered redshirting his senior season but returned for Tennessee's first No. 1 ranking and an upset of then-No. 1 Memphis.
[...]
It was a very tight circle of people who knew. That circle included Lofton's parents, the Tennessee coaches and medical staff and a handful of others.

The only teammate Lofton told was fellow senior guard Jordan Howell, and that was late in the season. Lofton and Howell roomed together on the road.
[...]
"It's the hardest thing I've ever had to go through, but I know now there's nothing out there I can't overcome," Lofton said. "I wanted to deal with it on my terms because I didn't want it being a distraction for our team. I knew if it came out, everything would change. I didn't want it that way."

Read the whole story at the link - you will be inspired:
ESPN - Tennessee's Lofton quietly faced and beat cancer - Men's College Basketball
Posted by Wordjunky at 10:39 PM
Email ThisBlogThis!Share to TwitterShare to FacebookShare to Pinterest