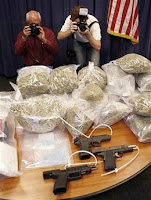 The text message went on to discuss a "sale" on cocaine and gave details on reduced prices, the news release said.

One student allegedly dealing cocaine was a month short of obtaining a master's degree in Homeland Security and worked with campus police as a student community service officer.

I guess he thought he knew enough not to get caught. Oops.