Alan Wilson, Tennessee Alpha '80, is the new CEO of McKormick Spices. This article comes from the University of Tennessee Alumnus Magazine. 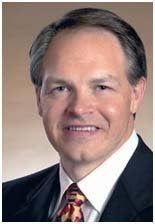 America’s palate is becoming more sophisticated, and Alan Wilson is big into the business of supplying the spices to satisfy the nation’s taste buds. Wilson (Knoxville ’80) is the new CEO and president of McCormick & Company Inc., the world’s largest spice producer, headquartered in Baltimore with operations in such diverse locales as India and France. These international operations require a geographically nimble CEO—Wilson travels about 35 percent of the time. Recent destinations have included China, India, Australia, and countries of the European Union.
[...]
Wilson graduated in communications (“I thought I wanted to be a broadcaster”), served in the army, and worked for Procter & Gamble before joining McCormick in 1993.[...]
He says he wants to continue to grow the company. Many parts of the world could be ripe for expansion, with Eastern Europe on the short list. He’s proud of McCormick’s history of social responsibility and points to agricultural sustainability programs the company began 25 years ago. As he wrestles with cost and personnel decisions, he tries to be ever mindful about consistently communicating McCormick’s priorities. Wilson says he establishes professional objectives and is graded on his performance like everyone else in the company. “I pride myself on beating my objectives,” he says.

Alan was also president of the SigEp Chapter in Knoxville. I could share a number of spicy incidents from that time, but for now, let's just say "What happens in SigEp, STAYS in SigEp."

Tennessee Alumnus Magazine - Wilson Has a Taste for Leadership: Alan Wilson
Posted by Wordjunky at 12:45 PM
Email ThisBlogThis!Share to TwitterShare to FacebookShare to Pinterest