‘We are ready to take this campus by storm’

Indiana Beta (IU) is preparing to move back into their house. The chapter was closed in 2002 by HQ and re-established in 2006. 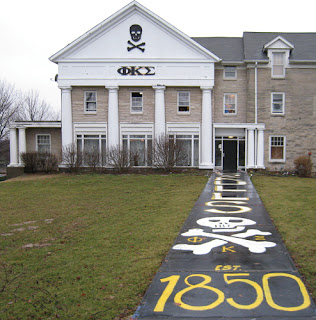 The current Phi Kappa Sigma fraternity house at 815 N. Jordan Ave. will be occupied by Sigma Phi Epsilon beginning this fall after a six year hiatus from campus. Sigma Phi Epsilon closed its IU chapter in 2002.

After a six-year absence from their house, the brothers of the Sigma Phi Epsilon Beta chapter will be returning home for the fall 2008 semester.

“All of the guys are excited about moving in,” Coward said. “It will be good to be all together in one place.”
[...]
The Beta chapter was re-established by its national headquarters in 2006 and has been growing ever since, said Cale O’Bryan, vice president of communications for the fraternity.

Coward said the fraternity has 70 members and is still looking for more.

“We are always looking for new members to join,” he said. “Our recruitment is a rolling, year-round recruitment.”

Coward said members of the fraternity become part of the “Balanced Man” program, which requires them to complete different challenges to progress in the fraternity. He said they focus on more than just partying.

Sigma Phi Epsilon president Pat O’Marro said the fraternity is different from the stereotypical idea of fraternities people might have in their minds.

Since the fraternity was re-established, he said, its core principles have become “a sound mind and a sound body.”
[...]
O’Bryan said that in December, the fraternity received the “The Highest Standard of Excellence Award” from the IU greek community. He said Sigma Phi Epsilon ranks among the top three fraternities with the highest GPA on campus.
[...]
O’Bryan said moving back in the chapter house is just the start of more things to come.

“We are ready to take this campus by storm,” he said.

Well, they already have the non-PC design set up for them.

‘We are ready to take this campus by storm’
Posted by Wordjunky at 10:42 AM
Email ThisBlogThis!Share to TwitterShare to FacebookShare to Pinterest