From deep in Huckabee territory... 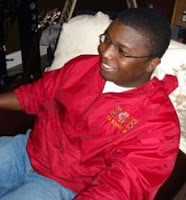 Corey Perry's race was far from his mind when he was elected president of his fraternity last semester.

But his election to the top leadership spot for an Interfraternity Council group represents one of the first times a black man has led the group of eight fraternities nearly wholly dominated by white members.

Perry, 20, even looks different in his fraternity, Sigma Phi Epsilon. He's the only black member.
[...]
Perry was elected by his brothers at the end of last semester and took office before finals. He believes that he will make a good president because he is able to connect and identify with all of his brothers and because he is adamant about keeping traditions.

Perry said that he was attracted to this fraternity because it felt like home, and because it was different from the rest, despite there being three traditionally black fraternities already on campus.

SigEp, as usual, leading the way.