Update: To read an excerpt or purchase the book - go to www.bartnewman.com

Bart Newman knew he might not come back to his wife and little girl.

He remembered the journal his wife, Julie, had given him the day he pulled out of Fort Bragg, N.C., headed for war in Baghdad.

Bart Newman turned his journal of things he wanted his daughter to know, in case he didn't make it home from Iraq, into a book. 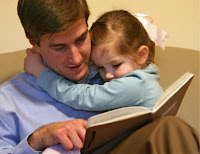 Bart Newman, 32, reads passages from his Iraq journal to his daughter Kate at their Marietta home.

"Record some thoughts while in Iraq," she scribbled inside the cover. "Some day, I suppose we will look back on this year and wonder how we made it."

She quoted a favorite Bible passage: "Therefore we do not lose heart. Though outwardly we are washing away, yet inwardly we are being renewed day by day. For our light and momentary troubles are achieving for us an eternal glory that far outweighs them all. So we fix our eyes not on what is seen but on what is unseen. For what is seen is temporary but what is unseen is eternal."

She ended with, "I love you and count the days until we are together again."

Newman had volunteered for this war. He knew the danger involved but had looked forward to military service since his senior year in high school, when he was awarded an appointment to the U.S. Air Force Academy. Two weeks before he was scheduled to report, Newman was medically discharged because of childhood asthma. He headed to the University of Georgia instead.

The Woodward Academy grad excelled at UGA. He served as president of the student government association, was a founding father of the Georgia Delta chapter of Sigma Phi Epsilon and a member of two SEC Championship tennis teams.

He was in his second year of law school when the World Trade Center collapsed on the day we simply refer to now as 9/11.

When the army started recruiting, Bart Newman saw a chance to do what he always wanted.

The army disqualified him too, but this time he wouldn't take no for an answer. He sought a waiver and got it.

It was the summer of 2003. America had been in Iraq four months.

His job was to advise the command on legal issues and attend daily briefings on the state of the war.

At the end of each of those briefings, the chaplain introduced "The Hero of the Day," a fallen soldier. That part always held Bart Newman's attention.

Day after day, month after month, the men's stories haunted Newman. He was a husband and father just like many of them. They hadn't gotten out alive. Maybe he wouldn't either.

He thought about his 18-month-old daughter, Kate, and what he would say to her about life if he didn't come home to say it.

Bart Newman had a lot to say about God; about choosing a husband and about what she might do with her life.

He told his baby girl to make Jesus the center of her life because there was nothing more important than figuring out where she'd spend eternity when she died.

He told her about his relationship with her mother, Jules, as he calls her; that he believed we could have marriages of passion, devotion and love if we'd only see our relationship with our spouse the way God does and not the way the world does; and instead of asking what she would do with her life, ask herself "how will eternity be different because of me?"

The God that Bart Newman hoped Kate would one day believe in was the same one at the center of his prayers. "Protect me and if I don't come home, protect my wife and daughter."

Months later in January 2006, Bart Newman returned to his family in Fort Bragg and eventually to Marietta, where they live.

In a large law office conference room overlooking downtown Atlanta, he talked recently about Jules, Kate, his 14-month-old son, Luke, a third child due in May and the journal he kept while in Iraq. He has since turned the journal into a book, "Because of Baghdad: What a father would say about life if he didn't come home to say it."

It's dedicated to Kate, Luke and the children he might have in the future but any one of us would be better for reading it.

Soldier's words from Iraq can inspire us all | ajc.com
Posted by Euripides at 10:19 PM
Email ThisBlogThis!Share to TwitterShare to FacebookShare to Pinterest