Dance Marathon Mom Now on the Receiving End of Charity

Thon mom reflects on prior dancing days
By Caitlin Cullerot
Collegian Staff Writer
This is the second in a five-part series exploring the Four Diamonds Fund's defining qualities -- courage, wisdom, honesty and strength -- and the people who embody them. 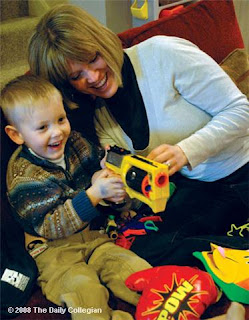 Meredith Kirby and her son Max bring out their Thon toys for this year's Thon. Meredith was a Thon dancer when she attended Penn State.

"You smell like poopy," yelled Max Kirby, an energetic, blond-haired 4-year-old, to his newly adopted baby sister, who apparently soiled her diaper.
Lego blocks littered the floor of the finished basement, and the dog sat in the corner chewing on a foam dart from Max's Nerf gun.
The only indicator that the Kirbys have conquered cancer with the help of the Four Diamonds Fund is a small scar that peeks out of Max's waistband and a signed basketball from Thon Hoops, which rests on a glass shelf above the family's television.
Meredith Kirby's experience with the Four Diamonds Fund isn't just as the mother of a child who benefits from the Interfraternity Council/Panhellenic Dance Marathon; the wisdom she gained after trips to Hershey Medical Center was strengthened after an experience with Thon long before Max was ever born.
After dancing in Thon in 1994, Meredith always hoped to be involved with Thon as an alumna, but she never expected to become one of the Four Diamonds families.
Meredith's son, Max, was diagnosed with a stage four germ cell tumor two years ago after she and her husband Steve Kirby noticed a mass near the base of his spine. The cancer had spread to Max's lungs and lymph nodes by the time it was discovered.
After Max's initial diagnosis, the family was referred to the Hershey Medical Center.
Now, as a member of a Four Diamonds family, Meredith said she knows what it's like to benefit from the fund she once helped support.
"When you're a dancer, it's like, 'Oh God, those poor families.' You never think it's going to be you," Meredith said.

After her father was diagnosed with cancer, Meredith danced during her senior year for her sorority, Delta Zeta, despite lifelong foot problems. Meredith's podiatrist called her "crazy" for participating in an event requiring her to stand for 48 hours.

Meredith said her older sister had danced twice for Gamma Phi Beta sorority and had shattered her kneecap the first year while diving on the Slides of Strength, baby powder-covered mats where dancers are massaged.

"She finished the last half of Thon on crutches," Meredith said. "After that, I knew I could do it."
Meredith said the most memorable moment as a Thon dancer occurred toward the end of the weekend when a man came over to her and massaged her shoulders.

"See that boy over there?" the man asked Meredith. "He's my son, and he wouldn't be here if it weren't for you guys."
Fourteen years later, Meredith understands exactly what he means.
"Max's cancer could have been emotionally and financially devastating, but thanks to the Four Diamonds Fund, it's not," Meredith said.
The fund has covered every aspect of Max's care that insurance does not, including co-pays and special health drinks.

"We never saw a bill," Meredith said. "We could make decisions based on what was best for Max and not what our insurance would cover."
Max's last trip to Hershey for chemotherapy was more than two years ago, and he has been in remission since.
Max attended Thon for the first time after he finished treatment, and this will be the family's third Thon since Max's diagnosis.
"It was so funny because I kept telling Steve what to expect, but nothing prepared him for the magnitude of Thon," Meredith said. "We were both in tears by Sunday."
Sigma Kappa sorority and Sigma Phi Epsilon fraternity, 524 Locust Lane, will sponsor the Kirby family.
"You grow so close to the students you work with every year," Meredith said. "Sometimes I wish they would never graduate."
Posted by Euripides at 6:45 AM
Email ThisBlogThis!Share to TwitterShare to FacebookShare to Pinterest