How do you get to be on the team? Sometimes you need little push. 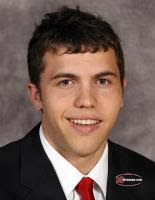 Then, there’s Cole Salomon. The Omaha native, who played a season at NCAA Division II Nebraska-Kearney, transferred to Nebraska so he could join a fraternity and hang with his buddies. Have fun. Be a college student.

The catch? Part of his initiation for Sigma Phi Epsilon was this dare: Participate in walk-on tryouts for the basketball team.

“It was very intense,” Salomon said. “It was one of the toughest workouts I’ve ever gone through.”

Later that October night of 2006, Salomon heard back from Nebraska coaches. They wanted him.

Dare? Or moving beyond the "comfort zone"? It would be ironic if his new team obligations caused him to drop the fraternity. Let's hope that doesn't happen.

HuskerExtra.com - Lincoln, Nebraska - Huskerextra - Mens Basketball
Posted by Wordjunky at 9:24 AM
Email ThisBlogThis!Share to TwitterShare to FacebookShare to Pinterest