UF Kappa Sigs Find Out What Money Can Buy 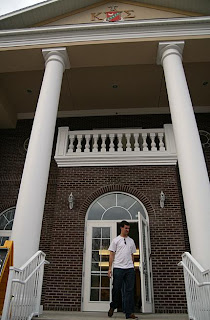 After a year of building, decorating and testing couches for the right balance of comfort and durability, members of Kappa Sigma Fraternity at UF are prepared to move into their new $5 million Southern-style mansion — but they can’t call it home just yet.

Many members are left with little choice but to crash on friends’ couches for a few nights.

The brick and stucco mansion, 1120 SW Ninth Road, sits behind the mostly female turf of Sorority Row and covers almost 24,000 square feet of land. The fraternity purchased the plot in 2002.

Kappa Sigma is a member of UF’s Interfraternity Council and is independent from UF’s housing department.

Merkel said the new headquarters can house up to 50 people, and 47 members will occupy 20 double and nine single rooms in the house this semester.

The double bedrooms were designed with Hume Hall in mind. One bathroom separates two bedrooms shared by shared by four suitemates.

For every three single bedrooms, members will share a common room and bathroom.

In addition to a mortgage, members raised nearly $1.25 million in donations from more than 130 donors to pay for the house, Merkel said. The goal is to raise $2 million, according to the Kappa Sigma Web site.

The manor’s facade features four sturdy columns stretching from the porch to the second floor, rising above a small white balcony. The fraternity’s letters, which cost $4,000, and its crest overlook the massive entranceway.

After passing through the elegant foyer, visitors will enter the chapter room, a 1,100-square-foot space where 123 members will gather for weekly meetings. A huge, bright orange-and-blue wall adorns one side of the rectangular room.

The first floor also features a grand dining room capable of entertaining 175 people around a $13,000 dining room set, which, like most of the furniture and all of the residents, has not been moved in.

The house also has a large ladies’ sitting room and restroom for neighboring sororities to use when visiting for dinner.

The second floor contains mostly bedrooms and a 1,400-square-foot game room, which will soon contain pool tables, a foosball table, several couches and a huge TV.

The third floor is designated as the quiet area of the house, with a large merlot-carpeted library to be equipped with four long conference tables and beige wrap-around couches. There is also office space for five of the fraternity’s executive officers to share and a suite for the president.

The suite consists of a bedroom, bathroom, walk-in closet and office. It is the only place in the house with bright-blue carpet and is part of the fraternity’s efforts to incorporate a “professional aspect” in the house, Merkel said.

With the inclusion of an elevator; fireproof, wood-like vinyl flooring inside the house; and a few 50-inch, flat-screen TVs, the house boasts many technological innovations that other fraternity houses do not.

“There’s been a great renaissance in Greek housing,” Merkel said.

Motion-detecting light sensors in most of the mansion’s rooms, hallways and large meeting halls ensure an illuminated path without the flip of a switch. It may take a few weeks for the fraternity to appreciate the cool value of its $500,000 air-conditioning system, but Merkel said the top-of-the-line system will be worth a more expensive utilities bill because every room has its own computerized air-conditioning zone.

Mike Jones, Kappa Sigma’s recruitment chairman this semester and UF sophomore, said he thinks the house will attract more members during recruitment week than in past years, when the fraternity recruited members from Lake Alice Field.

“This is really going to be advantageous for our rush, but I think that our brotherhood will really be what attracts them to Kappa Sigma,” Jones said. “Sorority Row isn’t exactly a disadvantageous location either.”
Posted by Euripides at 10:16 AM
Email ThisBlogThis!Share to TwitterShare to FacebookShare to Pinterest