NPR : From Togas to Yoga: Fraternities Try to Alter Image

This recent NPR article discusses changes in Fraternity focus, but mostly concentrates on the SigEps at Georgetown. There is also a link to listen or download as an audio podcast. 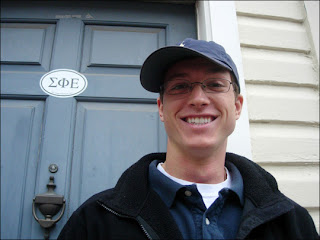 When asked about his fraternity's latest, wildest, hottest party, freshman and new Sigma Phi Epsilon recruit Lin Chen at Georgetown University in Washington, D.C., brings up pumpkins. Not togas or beer bongs, but pumpkins. And not pumpkin smashing, either.

"[We] laid down some tarps and just started carving. Music, hot cider, [got] the real family feel together," he says.

Fraternity President Paul Happel says he and his brothers aren't about random drunken hookups, either. They are trying to do something different.

"There's sort of this thing at Georgetown, this sort of unspoken rule that you don't exactly take girls out on dates," he says. "And it's interesting that SigEp really takes great pains to improve the culture of dating at the school, and they do that through having different sorts of events off of campus." Events like ice skating, formals or going to the opera.

NPR : From Togas to Yoga: Fraternities Try to Alter Image
Posted by Wordjunky at 11:50 AM
Email ThisBlogThis!Share to TwitterShare to FacebookShare to Pinterest