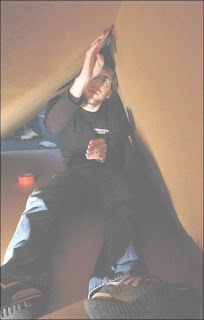 Nick Campbell, a member of Lambuth University's Sigma Phi Epsilon fraternity, tapes together a cardboard box during the fraternity's annual Box City — Homeless for a Night. Last year they collected money and more than 1,500 items to donate to RIFA.

Lambuth University junior Randy Watson stood shirtless, and remarkably without shivering, Friday night trying to send an extreme message about helping the homeless in Jackson.
"I think what we're doing will bring more awareness to the conditions of homelessness," he said.

Watson and his fraternity brothers of Sigma Phi Epsilon set up a "Box City" in the parking lot of Northside United Methodist Church for the second consecutive year to collect clothing and monetary donations for the Regional Inter-Faith Association. RIFA operates a soup kitchen and community store to help those in need in the area.
Fraternity president Anthony Johnson said about 30 members of the organization were expected to sleep outside in their Box City on Friday night.
Students planned to take donations of clothing, food, money or anything else that can benefit the homeless and to turn it over to RIFA this morning.
The fraternity brothers hope to double their contribution from last year, when they were able to give $100 and 1,500 pieces of clothing and bedding to RIFA.
This year's box city was different from the first year because of the frigid temperatures.
"Last year it was 40 degrees," Johnson said. "It's supposed to be 18 degrees tonight and there could be a wintery mix falling, too. So I think this year we're definitely going to feel what it's like not to have the option of going home and having to stay outside."

The members of Sigma Phi Epsilon were afforded some of the comforts of home such as warm food and visits from supporters and loved ones.
Participants also were not without a heat source.
Lambuth sophomore James Williams provided a large metal pit and 120 split logs to burn throughout the night.

To keep themselves entertained, the participants said they planned to play Frisbee and football, tell stories and talk about girls.

Many local businesses made contributions to make the fraternity brothers' night out a little more comfortable.

The Lexington company Kirby Container Inc. donated the cardboard the young men used to construct their box houses.
Other businesses such as Starbucks, Papa John's and LongHorn Steakhouse restaurants helped the students as well.
For freshman Thayne Wright, 18, being outside in the cold has changed the way he looks at the homeless population.
"We only have to be out here for one night, but the homeless have had to go through it much longer," Wright said
.
According to a study conducted in 2007 by the National Alliance to End Homelessness, there are close to 750,000 homeless people in the United States.
Of those, more than 8,000 live in Tennessee. About 25 percent of the homeless people in America are children, and almost half of those are under the age of 6.
Visit jacksonsun.com and share your thoughts.
Posted by Euripides at 9:41 AM
Email ThisBlogThis!Share to TwitterShare to FacebookShare to Pinterest