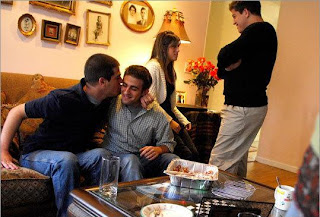 The Morris quadruplets are now 20. From left: Paul, Jesse, Sabrina, and Tyler in their Weston, Conn., home. (Jennifer S. Altman for the Boston Globe)

WESTON, Conn. - It's a brisk autumn morning, and Jesse Morris has been at it since 5 the evening before: flipping burgers, dragging couches outdoors, setting up plasma TVs and online video games, checking the supply of free food and live music, shaking down passersby for donations.
A junior at Babson College, Jesse is vice president of Sigma Phi Epsilon fraternity, which recently held a 24-hour fund-raiser to support autism research. It raised nearly $3,000 - not bad for a quickie campus campaign. At Philadelphia University, Jesse's sister Sabrina is in the thick of planning an autism fair, and at the University of Richmond, brother Tyler has been working all semester with autistic children. In the past six years, the Morris family has raised $100,000 for autism research in an annual pledge walk.
Jesse, Sabrina, and Tyler are three of the Morris quadruplets, the first in vitro quads born in New York State. The fourth quad, Paul, is at the center of their efforts, and his siblings describe him as "the heart of our family" and "the glue that holds our family together."
Paul is autistic.
The Morris quadruplets, now 20, were born Aug. 16, 1987, at North Shore University Hospital on Long Island. Robin Morris was 37 when she gave birth to four babies, each a minute apart. Husband Dan was 38.
First came Sabrina, then Jesse, then Tyler, and finally Paul. Born at 31 weeks, they weighed less than 2.5 pounds each. At six months, Paul, who had a cyst in his chest, went into cardiac arrest and lost oxygen for more than 20 minutes before being resuscitated. Doctors then removed most of his right lung.
Robin and Dan Morris hoped that was the worst of it. But as Paul grew, he didn't seem to hear. His language was delayed. Finally, the diagnosis: atypical developmental disorder. Autism.
It is one of the worst words a parent can hear. "I was going, 'Not the A-word, not the A-word,' " says Robin, who writes a thrice-weekly blog - called "The A Word" - on the disorder for the online site revolutionhealth.com. Autism is a brain disorder that can impair social interaction, cognition, and communication.
While his siblings grew into active, articulate children, Paul did not start speaking until age 6. But he's chatty now. "He's making up for lost time," says Jesse, sitting in the living room of the southwestern Connecticut home with his sister, brothers, and parents. They've all come home for Thanksgiving: Jesse from Babson, Tyler from Richmond, Sabrina from Philadelphia, and Paul from the College Internship Program, a private school in the Berkshires for young people who have learning and social disabilities.