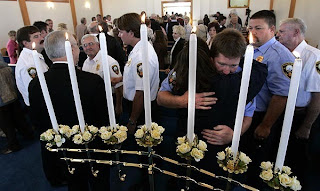 After a service of remembrance Sunday for the victims of last weeks fatal beach house fire, firefighter Sean Ostmann gets a hug from a town resident at the Ocean Isle Beach Chapel with the candles for each of the victims lit in the foreground. The small ocean chapel that served as the safe zone for many of the survivors of last weeks tragedy, served as a community gathering spot this Sunday helping residents cope from the events of the past week. Firefighter Ostmann was one of the firemen who were dispatched to the fire scene last Sunday. Photo By Randall Hill/The Sun News

What caused the fire in North Carolina that killed seven students? Lots of opinions, few answers.

I was in Pawleys Island SC last week as the details emerged from the horrible fire. Pawleys is a beachfront community similar to Ocean Isle NC, 30 miles south of Myrtle Beach SC (Ocean Isle is 30 miles north of Myrtle Beach). The local newspapers were full of details, with pictures of the charred remains of the house, long biographies of the victims, and eyewitness reports from everyone who saw the tragedy unfold. It was hard to read. My daughter is in college as well. If she had been there I cannot conceive how I would recover from such a loss.

Here are some of the latest stories.

Perhaps out of understandable concern for the feelings of the family, the role of alcohol in this tragedy is being played down.

Students, parents and colleges need to face the likelihood that binge drinking played a part in the heartbreaking loss of seven promising young people. It's part of a sad pattern.

"Officials say a deadly house fire in a North Carolina beach town may have been sparked by smoking materials. But they say the preliminary investigation has not found a definite cause."

Amanda Goyer spent two years at South Carolina before transferring to Rhodes College. She was in the same Delta Delta Delta pledge class as Carly Pendley, the older sister of fellow Tri-Delt and victim Cassidy Pendley. Goyer also knew victim Allison Walden, who Goyer described as "a beautiful young woman with a graceful soul." Goyer created the Facebook group "Pray for the victims and friends and family of the Ocean Isle Fire."

"I started this group because I felt so far away from my sorority sisters, and I wanted to do anything possible to help and to show support," Goyer said through Facebook. "I didn't expect [the group's membership] to reach almost 10,000 people!"

It's impossible to say at this point whether an internal sprinkler system would have saved lives in the tragic Sunday house fire at Ocean Isle Beach where seven South Carolina college students perished. But the fire has raised questions as to whether North Carolina building and fire codes need to be upgraded to stricter standards for large beach homes.

The funeral for the final victim of the North Carolina beach house fire was held Monday.

There was a celebration of Cassidy Pendley's life in North Charleston.

Cassidy was an honors student and varsity soccer player at Fort Dorchester High School in the Lowcountry.

She was a freshman at USC where she studied chemical engineering.

More than 200 people showed up for a memorial service at Ocean Isle Beach on Sunday.

Posted by Wordjunky at 7:08 AM
Email ThisBlogThis!Share to TwitterShare to FacebookShare to Pinterest