Another great news story. This chapter has been doing their special event for the last 16 years. 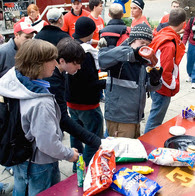 By: Jacob Ela /The Daily Cardinal

The Madison Fire Department and patients and staff of the Children’s Hospital joined fraternity members at their Langdon Street house for the launch. About 60 members will ride their bikes to Minneapolis to deliver the game football to the Badgers as they take on the University of Minnesota Saturday.

“We’re really trying to get more people involved this year,” Goldberg said. “The best part is definitely the fact that we’re raising money for the kids.”
[...]
Raising more than $100,000 since its first year, TDT is the largest Greek philanthropy event on campus, with more than $20,000 raised in the last two years, according to UW-Madison junior and Sigma Phi Epsilon member Nathan Fuller.