Big Man on Campus pageant at UMKC raises $3,000 for charity

OK, I confess I must be approaching 'geezerhood.' I do not see the attraction here, just the absurdity. But if it raises a bunch of money for a good cause, I guess it must have some redeeming value. 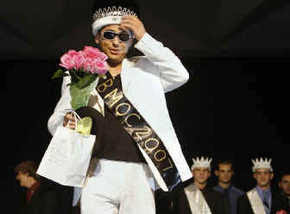 Looking straight out of “Miami Vice” (except for that black shirt), Shawn Hartman walks away with the BMOC title Friday night at UMKC. He was sponsored by Sigma Phi Epsilon. His talent: a “demonstration of anatomy” — striking bodybuilding poses to the song “I Touch Myself.” His hobbies: golf and checking the stock market.

Next time you’re in a beauty pageant, just follow the lead of the 11 contestants in UMKC’s BMOC pageant.

To be the BMOC — that’s Big Man on Campus — you have to strut your stuff in beach wear (like breakaway shorts) and formalwear. And, like Miss America, you have to display a talent.

But creativity counts. So your talent might be playing the video game “Guitar Hero” against someone in the audience. Doing a Christian rap while wearing a tutu. Striking bodybuilder poses to the Divinyls’ “I Touch Myself.” Or grinding on a girl (think lap dance) while singing over Madonna’s “Like a Virgin.”

These dudes were creative in the interview segment, too. Zach Tebow (rep-ing Lambda Chi Alpha), asked to name his favorite holiday, chose his birthday: “People give me stuff, and I don’t have to give anything back. Fantastic.”

And Jesus Butler (sponsored by, appropriately, Campus Crusade for Christ) declared Jessica Alba to be his Hollywood crush, “because she’s a great actress, and I respect her talents immensely.” Uh-huh.

The pageant Friday night was Delta Zeta sorority’s 15th annual BMOC show, which raised about $3,000 for the speech and hearing clinic at Children’s Mercy Hospital and the Painted Turtle, a camp for sick kids. Points from the pageant and from pre-show fundraising determined the winner.

Bodybuilding poses? Extolling the "talents" (both of them) of Jessica Alba? Guitar Hero? - - - This is entertainment? Oy.

www.kansascity.com | 11/05/2007 | Big Man on Campus pageant at UMKC raises $3,000 for charity
Posted by Wordjunky at 6:34 AM
Email ThisBlogThis!Share to TwitterShare to FacebookShare to Pinterest