ASU threatens to use Eminent Domanin on Frat Row

Arizona State U. officials have warned fraternities on Alpha Drive that the school could invoke eminent domain to demolish fraternity housing unless there is a negotiated settlement... to demolish the fraternity houses. Apparently this is the modern day equivalent of "negotiating in good faith."

I guess they have a "Manifest Destiny" 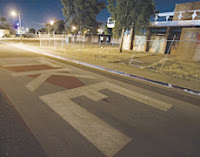 The University is "prepared to aggressively work toward a negotiated agreement" to demolish and rebuild Alpha Drive, said Carol Campbell, ASU chief financial officer, in a Nov. 12 letter to Alpha Drive representatives and University officials.

"It was obvious what she was threatening," said Jeff Abraham, a spokesperson for the Alpha Drive property owners. "It is certainly our hope that we don't get to a point where eminent domain is required, but it is something the University will keep in its back pocket."

Eminent domain is a term that describes the state's power to appropriate property to be used by the public.

ASU has the power of eminent domain with approval of the Arizona Board of Regents — who govern the state universities — and for educational or university purposes, Campbell said.

"I'm not saying we'd exercise (eminent domain) in this case," Campbell said. "We have used it in other instances to assemble land that was needed."
[...]
The Nov. 12 letter was the first time ASU officially stated that the project would replace the fraternity houses with residential properties under control of ASU, Abraham said.
[...]
The San Diego-based Pierce Company was originally chosen by the fraternity property holders to develop new fraternity housing after Alpha Drive was demolished, but another developer, American Campus Communities, would be the sole developer of any student housing, Campbell said in the letter.

"This comes as a shock," said Andrew Burns, the treasurer for the alumni board of Sigma Phi Epsilon and a 2001 ASU graduate.

Burns said he only could speak for Sigma Phi Epsilon, and not the other fraternities.

"We want to protect the Greek system."

ASU Web Devil - Eminent domain could be used on Alpha Drive
Posted by Wordjunky at 8:50 AM
Email ThisBlogThis!Share to TwitterShare to FacebookShare to Pinterest